Growing up I was only exposed to a single parenting style – that of my parents – but now that I’m a parent who talks to and observes other parents I’ve come to realize that there is no singular correct child-rearing philosophy. Every parent I’ve ever met essentially wants their children to be successful, but what is success? I guess at its basest level a successful adult is someone who can exist independently, in other words someone who isn’t a drain on his/her parents. But can simply existing without constantly having to ask your mom and dad for an allowance be considered success. For some yes, for others no.
Folks of my generation freely throw about the work loser: he’s a loser, she’s a loser, they’re losers. Perhaps this is an offshoot of our capitalist society; capitalism is definitely all about winning and losing. But is it really that cut and dried? Do sayings like “second place is the first loser,” or “if you don’t win you’ve lost,” speak any kind of truth? When I look back on my own life, though I’ve entered I’m sure over one hundred competitions, I’ve never won anything (I did win the cub scout pinewood derby once, but my dad built that car), does that make me a loser. Eighteen years after saying my vows I still have a happy marriage, my kids are nearly perfect, I’ve climbed an eight thousand meter peak – no oxygen – completed two Ironman races, ran five marathons, posses a graduate degree (I think that piece of paper is around here somewhere) have a loving extended family and have a circle of friends that would be the envy of any man, so I really don’t feel like a loser. But still I’ve never taken home that gold medal.
The reason that I’m pondering this is because I’m continually pondering whether or not I’m doing a passable job as a parent. Over the years my kids have been involved in a number of sports and during that time I’ve observed a number of boys and girls who are obsessed with winning. The sport/event is fun and worthwhile if and only if they can win. It would be easy to say “well look at the parents,” but that isn’t the case: some of the most laid back parents have the most driven kids – at least that’s how it appears to the outside observer. It’s a kind of chicken/egg thing: is the fastest kid in the class naturally talented and therefore pushes himself because he knows he can win, or does he possess only average talent but is willing to push harder because he hates to lose. Do these kids love winning or hate losing? Personally I think it’s less of the former and more of the later.
I’ve never entered any competition with the expectation of winning and therefore have never been all that disappointed when I didn’t stand atop the podium. This isn’t to say that I don’t try hard: in the triathlon world I’m a fifty percenter, but I still train incredibly hard and race as though I’m being chased by the devil. I know a lot of people hold the philosophy “if you can’t win don’t enter,” I also know that a lot of parents think they are doing their children a favor by demanding that they win – that they crush the opposition – it’s a dog eat dog world out there, you’d better have the sharpest teeth. That’s a tough philosophy for me to swallow. I suppose I’ll just keep going with what feels right, and I suppose I don’t regret telling my son “who cares if he won today, in ten years he’ll be selling you shoes.”
Posted by mikemc at 10:33 AM 1 comment:

Learn to be Still

As I try to figure out how to raise my own children, I’m continually amazed by the insight and foresight of my own parents. My household had little in common with the Cleaver’s, but, like the Beav, I had a very wholesome, happy childhood. In addition to teaching me values of hard work, loyalty to family and friends, honesty and responsibility my mom and dad also demonstrated the importance of being comfortable with oneself.
Being comfortable with yourself may sound like a strange thing to teach one’s children, but now that I’ve embraced the hermit-like existence of being a writer I am so thankful for the ability to simply be alone. Don’t get me wrong, I thrive on telling stories and laughing with my friends, but I’m also able to be happy and comfortable just being by myself.
In the age of nonstop playdates, sleepovers, cell phones, video games, skype, text messaging, facebook and all sorts of other “social networking” devices I believe that it’s more important than ever to consciously teach our children to “learn to be still.” I remember a commercial with the pitch line “so you never have to be alone,” as though being alone were some kind of problem in need of a solution. If you never learn to be still, how can you ever expect to hear that still small voice – the one that tells you about life, and how to live it.
Posted by mikemc at 10:33 AM No comments: 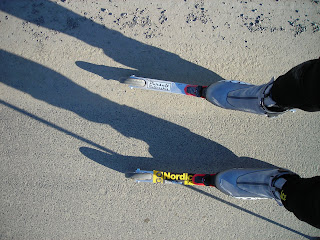 Just back, and still sweating, from my first roller ski attempt. It was a rare blue sky day as I rolled along the newly repaved roads of Snoqualmie Valley. It’s been awhile since I’ve tried something new and despite two falls I very much enjoyed being on the steep end of the learning curve. Being a neophyte at a sport as coordination intensive as skate skiing can certainly be exasperating, but it can also be exhilarating. The rapid improvement experienced by the beginner can be addictive; you know that next time you can go longer, faster better.
My first exposure to skate skiing was back in the early nineties when a four friends joined my wife and I on a weekend trip to the Methow Valley. We were out loaded down for a full day tour, slogging along in heavy leather books and what were basically narrow downhill skis when a small-framed lady came skating past, she was going quadruple our speed with what appeared to be less than half the effort. She was going to do the full 20K loop and be home in time for breakfast; I was amazed.
Traveling quietly, quickly and competently through the natural world is what I enjoy most, skate skiing and roller skiing are two new arrows in the quiver.
Posted by mikemc at 2:44 PM No comments:

Despite being addicted to politics I’ve really tried to keep this blog free of Washington nonsense, but now I just can’t keep quiet. I simply can’t believe that one of Mr. Obama’s first actions, his so-called Bold New Plan, will be to borrow another $775 billion from China so that more Americans can go to Wal Mart and buy more cheap junk manufactured in China. Is it possible for me to refuse this loan? Can I tell Mr. Obama thanks but no thanks, keep my five hundred bucks, and don’t put my kids even further into debt.
The way I see it the United States of America is in crisis mode, the problems as I see them are as follows:
1. Massive consumer debt.
2. Poor overall health and almost non-existent preventative medicine.
3. Global climate change.
4. Our crushing debt to foreign governments.
5. The daily loss of manufacturing jobs.
6. Our dependence on foreign energy.
7. The nonsensical abuse of both illegal and prescription drugs.
Mr. Obama’s plan addresses none of these problems and contributes to nearly all of them. If the next President wants to do something bold might I suggest what I call the Two-Wheel Solution.
The Two-Wheel Solution is a massive restructuring of our road system to accommodate two-wheeled transportation: namely bicycles. Cars would still have a place – transporting kids, carpooling to work, taking long trips – but there is no reason why the majority of trips currently taken in cars couldn’t be taken on a bicycle, if, and this is a big if, the trip could be taken safely. As a person who pedaled over two thousand miles last year I will be the first to admit that bicycling is dangerous, the danger being automobiles.
Our roads are designed for cars; bicycles are scarcely even given a second thought. It’s no wonder that people drive cars as our world is designed for them. It’s time for that to change. Instead of building more roads and desperately drilling for less and less oil we should invest our tax dollars into creating bike lanes – either new or the conversion of existing automobile lanes. This gives drivers a choice, they can sit in gridlock or they can join the healthy happy bikers zooming past them in the bike only lane.
Increasing the use of bicycles in our daily lives reduces all seven of the problems stated above. Americans are unhappy and unhealthy, a situation many of us try to rectify by driving a fifty thousand dollar vehicle, bought on credit, to a gym where we spend hours working off the donuts we ate while sitting in traffic. Commute twenty miles a day and you can eat all the donuts you want while simultaneously eliminating that car payment and gym membership. In addition, by eliminating time spent in traffic and time at the gym I’d wager that most Americans would find a net increase in their daily free time.
The Two-Wheel Solution will reduce consumer debt, increase overall health, reduce carbon emissions, reduce our national debt, increase domestic manufacturing jobs and reduce our dependence on foreign oil. As a side benefit we will find a net decrease in drug abuse because healthy people are less likely to find happiness in a bottle, pill or pipe.
Who would oppose such an idea? Let’s start with the oil companies, then the prescription drug companies and finally the now begging on their knees automobile companies. That’s a lot of Lear Jets and tailored suits, so don’t hold your breath.

Scott, Bill, Brian and I are entering into negotiations for a ski trip along the famous Haute Route from Chamonix to Zermatt. At this point it looks like I’ll be spending the last week of March crossing the Alps with my friends; it doesn’t get much better than that.
The Ironman gig has satiated my desire to see just how far I can go physically, but I miss waking up in the mountains, breathing the cold thin air, the feeling of good snow beneath my skis. Bill and I skied the Haute Route back in 1999, and I’m looking forward to returning to the “civilized” world of backcountry huts, stinky cheese and myriad choices of dried meats.
I find that I continually have to have some goal, something on the horizon to prepare for. At forty three I’ve learned that life quietly slips by if I don’t continually strive to reset the clock. Going from one adventure to the next, always having that next race, trip or voyage to look forward to, to train for, slows down that relentless and pitiless clock.
Posted by mikemc at 5:47 PM No comments: