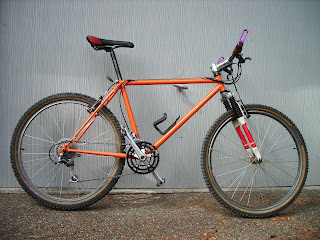 Way back in the year of our Lord nineteen hundred and ninety I bought a top of the line mountain bike – a Trek 990 – for $450. Now you gotta remember that back in them thar dark ages I was earning five hundred a week as a budding up and coming aerospace engineer, so the price tag was as steep as the hills I was dreaming of pedaling up. Over the decades I’ve made a few upgrades like a front shock and new brakes but the old black and pink paint job never sat well with me. Well finally I took matters to task and had the old steel lugged frame stripped down and powder coated orange. It was a bold move, but it turned out fantastic.
I rebuilt the bike the other day and must say I’m happy with the result. If I throw on a sealed bottom bracket and some modern wheels I think I might have something to take me into the next decade. Obviously a Santa Cruz Blur XC would be a nice upgrade, and the full suspension would be EZ on my old bones, but dang a fella's gotta draw the line somewhere. I have a single speed, a TT bike, a road bike, a mountain bike and am looking at cycle cross bikes, do I really need a full suspension mountain bike. We all know the answer to that question, but before I go shopping the old dog is going to have to get me around the mountain a few more times.
Posted by mikemc at 6:46 PM No comments: 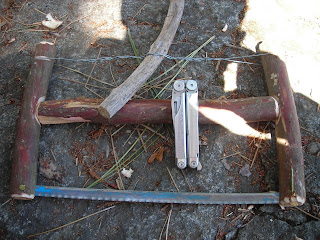 Last week while I was hanging out at a friend's cabin in Idaho I had need of a hacksaw, but could only find a single blade in the tool closet. After hacking away for awhile with just the blade I decided to make a backwoods saw; the only tool I used was a Leatherman Wave. The resulting saw felt better than what I have in the shop at home. All said and done it took me less than ten minutes to make and best of all my son Sam was impressed with the result.
Posted by mikemc at 8:31 AM No comments: 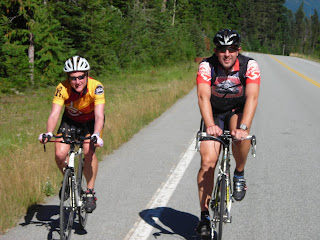 Many years ago a friend of mine wrote a story with the theme of transforming a dream into memory. It’s a theme I’m not afraid to steal. For two decades now I’ve been driving over the North Cascades Highway in a car loaded down with either mountaineering or skiing gear, and often I’ve said aloud “man I sure would like to ride this.” Summers are too short and time slips away, but after several false starts I managed to get a group together; August 14 was the date.

The alarm on my James Bond wristwatch never fails me and I was pulling on my new cycling shorts at four AM. Bradley, my partner in this particular crime, is, like me, an early riser and he was standing patiently beneath a dusky sky when I pulled my trusty Subaru into the Mercer Island Park and Ride. Twenty minutes later we met up with Kris and Wendy beneath Interstate 5 near Greenlake. Bradley and I were planning on riding one hundred miles round trip from the Colonial Creek campground to the Mazama General Store while Kris and Wendy planned to turn around thirty two miles down the uphill road at Washington Pass.

The temperature at Colonial Creek was cool, but the clear windless skies foretold heat so I put on sunscreen and left the arm warmers in the car. Normally I’m not much of a sunscreen kind of fellow, as it hints of forethought, but it was going to be a long day in the sun so what the hell.

Colonial Creek to Mazama is nearly to the foot fifty miles, and since I believe in the keep it simple stupid mantra I elected to start our day where Colonial Creek flows into the unnaturally green waters of Diablo Lake. Ten miles east of the Seattle City Light company town of Newhalem and sandwiched between the Diablo and Ross Dams, Diablo Lake is clear and toe numbing cold, but from the road it reflects a deep emerald green due to sunlight passing through microscopic particles of the mineral gneiss which has been ground off the surrounding mountains and held in suspension in the glacial waters.

Highway 20 eastbound from Colonial Creek rises steeply towards the Ross Lake Resort parking lot and provides no opportunity for the legs to adjust to a long day of pushing and pulling pedals. With only a pair of short respites the trip up to Rainy Pass is entirely uphill. We were in cycle tourist mode and consequently kept the speed slow and steady, the grade was gentle enough to allow each of us to find an all day rhythm and gradually we knocked off the miles. The road was smooth, the shoulder wide and the sun warm and I greatly enjoyed the soft pace and the rare opportunity to converse with my riding partners. I made good use of the opportunity to tell stories of the mountains I’ve climbed or attempted to climb. At one point I think Wendy became fairly exhausted with yet another story that began with “I remember one time…”

The drop from Rainy Pass was much too short and after only a minute of speedy descent we were back again to climbing – this time up to Washington Pass. Once again the grade was gradual and I feel into a smooth easy cadence and sooner than expected the fa 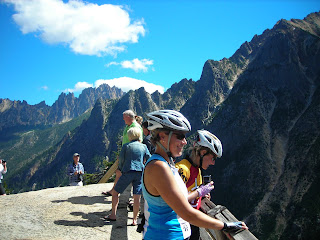 nglike Liberty Bell Tower began appearing over the treetops. At Washington Pass we joined the Harley Riders at the precipitous overlook where Bradley and I caught our first glimpse of the daredevil descent into the furnace of Eastern Washington.

The water fountains at the elaborate structure in the center of the Washington Pass Overlook parking lot were turned off, quite a disappointment, but it was downhill for all of us so our survival wasn’t in question. Bradley bid goodbye to Kris and Wendy as we headed east down the seventeen mile descent into Mazama.
Despite a recent remodel the Mazama General store was still funky and eclectic. The little store in the middle of nowhere is one of my favorite places, it was refreshing to see that even though things change they also stay the same. Bradley and I rehydrated and ate sandwiches in the shade, oblivious to the fact that the thermometer was now reading triple digits. “How hot do you think it is?” Bradley asked.

“Must be at least ninety,” I replied. I was shallow by twelve degrees. 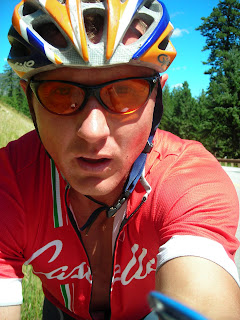 aunting and luckily I now have the maturity to know how to pace myself. At times like these you need to count your blessings and I was grateful for the small tailwind and the stunning scenery. This little pocket of Northeastern Washington is my kind of place.

I drank nearly the full measure of my two oversize water bottles and wondering why I hadn’t packed a third when I hit Washington Pass. I was thinking of flagging down a passing car to inquire as to whether or not they might sell me a can of Coke. As it turned out I scarcely took a drink for the next thirty miles as it was nearly all screaming downhill.

Bradley and I arrived at the car a full nine hours after starting out, our odometers agreed at one hundred and one miles. Our riding time was almost an even eight hours. We soaked our legs in the ice bath known as Diablo Lake and then got on the road, stopping at the Buffalo Run restaurant in Marblemount for elk burgers and cold Stella beer.
Posted by mikemc at 2:29 PM No comments:

Seattle is such an eclectic city that I often forget hidden gems. Ballard is one such jewel. Last Thursday Sam, Kris and I headed down to the Shilshole Marina for a stand up paddle board lesson from the guys at Ballard Surf. The lesson lasted all of thirty five seconds: stand here, hold your paddle like this, if you fall get back on the board and try again.
Getting on the board was easier than I had imagined, I was a little nervous about Sam as he was on a more tippy standard surf board, as opposed to a wider stand up paddle board (SUP). The head instructor had told me that Sam really should have a life jacket, but that he’d leave that decision to me. Sam has been in competitive swimming for three years, and because the board his was tied to was in essence a floatation device I opted for no jacket. It was one of those decisions that you kind of begin to regret as you get further and further from shore. But in the end Sam stayed atop his board the entire time and was even jumping up and down by the end so all’s well that ends well. 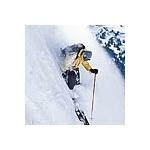 The assistant instructor was a cool fellow; he had the only tattoos I’d ever actually liked. On his right forearm were the words Every Breath, and on the Left was Is A Gift. I told him that he should have had it written upside down so he could be reminded, but he said that he needed to remind others more than he needed to remind himself. On his right shoulder was an image taken from a famous photo of the late great skier Doug Coombs. I would seriously consider a similar inking for myself but I would have to be a 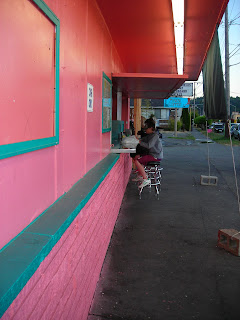 shot of Bill, Brian or Scott.

We paddled around for two and a half hours and then hit a little Caribbean sandwich shop called Paseo. Little did I know that this was some “must go to before you die” place. The Cuban Pulled Pork was definitely worth a second visit.

I’m now in the market for a SUP. Dang they are expensive. Julie and I are going to do the race around Mercer Island come September so I’m going to have to get a little practice. I like the simplicity of the sport. I live fifty feet from the water and could zip through my neighbor’s yard and be paddling inside of two minutes. It’s always something isn’t it.
Posted by mikemc at 8:06 AM No comments: 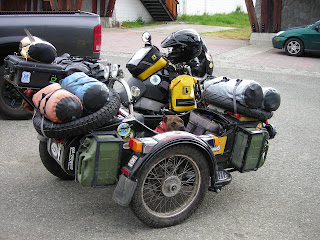 The camera in my backpocket was uncomfortable as we rode up the Denny Creek Road towards Snoqulamie Pass, but the sore butt proved worthwhile when I spotted Spirit the pitbull sitting atop his ride. Check out the amazing adventure of Spirit and his owner at http://www.theoasisofmysoul.com/.
Posted by mikemc at 9:08 AM No comments: