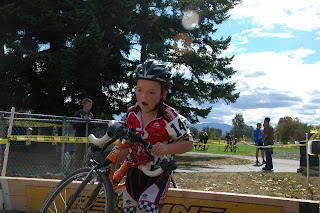 Friends ask me what it’s like to race cyclocross. I used to go into a big complicated huffandpuff, but now I’ve simplified matters by describing the experience as a thirty minute heart attack.

In cross there is no “hey let’s all get to know each other” rollout or mid pack get your wind back recovery periods, instead it’s a sprint from the bell, and from then on you just try to hold your position – maybe pick off a few guys in front. It’s difficult, if not impossible, to pass other riders on much of the winding course, so you have to get in position early and then fight to hold it. Unlike road and criterium racing, where the strength is in the pack, cross is an individual effort: it’s you against everyone else all the time.

Last Sunday I raced the first Seattle Cyclocross series at Marymore Park in Redmond. On Saturday afternoon I’d removed my front derailleur and my compact ring set and replaced it all with a single 46 tooth ring and a Rohloff chain guide. The guide cost me $110 and didn’t even fit. I took it back to the bike shop to see if there was another, correctly sized, version: there wasn’t so we cut it down with a hacksaw. Back at home I hit another snag in that the bolts were now too long, so once again out came the hacksaw. I guess this is why bike mechanics are called mechanics and not simply part putter oners. I like the simplicity of having only a single front ring; someday soon I’ll have to rig up a single speed ride and go uber simple.

While the bike was up on the rack I replaced my worn out front brake pads.

I was in the ten fifteen race and managed to get in a good warm-up prior to being called to the starting line. I had left my watch in the car, but it seemed like they were calling us up quite early. After a lot of standing around we moved to the start line, where we stood around for a long time more. Seconds after the race official called one minute till start I looked down and noticed that my left front brake pad was perpendicular to the rim. Crap. I must have forgotten to tighten it down. No front brakes today.

The race began in a slow but quickly building sprint and just as we passed the Cucina Fresca tent a big chunk of green fabric, perhaps it was some kind of fencing, blew onto the course. It took some cool headed riding by about a dozen guys to avert disaster. I hadn’t been able to preview the course so I was seeing everything for the first time. Despite the evening rain the course wasn’t muddy, some of the grass was saturated, but nothing too mucky. The first set of barriers were in a tough spot because you had to dismount while simultaneously descending a hill and making a hard right. It was a fairly technical spot that required some good dismount/mount skills, and consequently I lost some hard won ground each time through.

Luckily I’d been to Kore Kross the Wednesday before and had ridden the touchy downhill hairpin turn portion of the route. This was a tricky spot and with only one brake I struggled to check enough speed and barely missed running through the tape on more than one occasion. My cornering skills really suck, I think that the trick is to burn your speed before the corner, roll through tight and then accelerate out. I’m currently hitting the corners much too fast which then forces me to both swing wide and brake mid turn, thus causing my rear wheel to either skid or bounce. If I keep that up I’m going to go down sooner rather than later.

I was gasping on the final lap and really struggled on the barriers. It’s surprising how much energy it takes to get over those things. The good guys make it look so easy. As I came through the final barriers, which were just shy of the finish line, I could hear a couple of guys coming up on me, no way were they going to pass. I made an overly aggressive – and somewhat crushing – remount and pushed to the finish line. I finished midfield.
Posted by mikemc at 9:54 AM No comments: 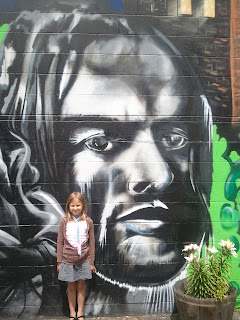 Took a trip into the urban jungle - Capitol Hill, Seattle - with my friend Kris today. All this clean living must be paying off as my legs seemed to have no stop in them. I've been reducing my caloric intake while eating mostly, whole, clean-burning, low glycemic index foods. I'm not losing any weight, but I feel good. Well I feel pretty good, my head is bugging me.

I've had a headache ever since I went over the handlebars during the cross race on Sunday morning. It's like a three day hangover. I think I clocked myself pretty good. I hope it gets better over the next few days.

I watched a great movie last night - 180 Degrees South. It was a documentary about a guy who goes to Patagonia by way of Easter Island. The movie documents the adventure of this guy Jeff Johnson, but it showcases two giants of mountaineering (as well as business) Yvon Chouinard (founder Patagonia) and Doug Tompkins (founder The North Face). The movie was beautifully shot and it has something to say - definitely worthwhile.
Posted by mikemc at 8:07 PM No comments: 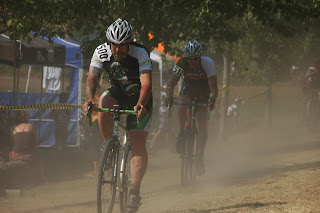 The dust is going to turn to mud as the season progresses.

I'm learning that training for bike racing is more than simply pushing the pedals round and round. I have plenty of low end endurance - I could ride Seattle to Portland tomorrow - but I'm lacking in the high end, top gear department. Cyclocross, like criterium racing, seems to be more about running it wide open and hoping that the race ends before you do. I'm beginning to realize that in order to race in high gear I've got to train in high gear - at least some of the time.

Today I did a 2X20 on the trainer. I warmed up for 10 minutes then went all out for 20 minutes followed by a 2 minute rest, 20 more hard minutes and then finally a 10 minute cool down. I haven't been on the trainer for a couple of months and honestly the hour passed quickly and easily.

Tomorrow I'm back on the road.
Posted by mikemc at 5:39 PM No comments:

A Few of My Favorite Things 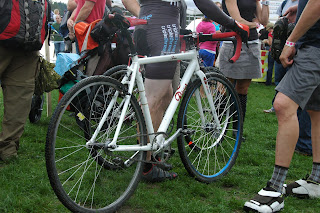 What I like about cyclocross is that it combines two of my favorite things: cool bikes and cool shoes.

Took a nice easy one hour spin today. Tomorrow I take to the hills.

Posted by mikemc at 8:50 PM No comments: 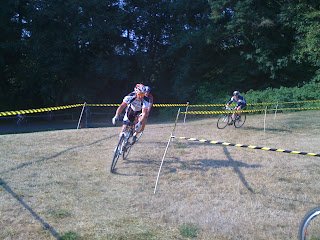 Well I can’t claim to be a crash virgin anymore – during my first cyclocross race I clipped a tree with my front tire and went over the bars, luckily I broke the fall with my face. Never again will I doubt the efficacy of a good snug helmet.

Man what a scene cyclocross is – more like a medieval fair than a sporting event. I parked in Juanita and cranked up the hill to Big Finn Hill Park, it was a good warm-up and I showed up hot and ready to go. I was happy to see that Chad had come early to set up the Cucina Fresca tent; this was the first time I’d been at a race with an official team tent.

Funny how something that was started as a fun way to get through the shoulder season has taken off and become a sport in and of itself. I suppose it’s not all that funny – by funny I mean odd – I suppose a lot of sports are spawned by weird, wild wonderful happenstance.

The road races I participated in over the past four months were fairly clandestine affairs: you’d drive to some semi-secret location and ride over seldom used roadways – I suppose that’s the whole point – but this cyclocross was a real event – totally on the radar. Thow in a hog on a spit and some good grog and we would have had a real party. During most road races I was lucky to see one or two other teammates, today the Cucina Fresca squad was out in force with over twenty riders flying the colors. Riding with a team is a different sport than going solo and it was good to see some friendly faces, and speaking of friendly faces my friends Joe and Kris came to watch and cheer me on – nothing like a little friendly cowbell.
Posted by mikemc at 10:16 PM No comments:

Cucina Fresca had a cyclocross meet the team ride Saturday morning, so I put on my knobbies and drove over to St. Edwards park for my first taste of the fall sport. My takeaway is that cross is going be more challenging than expected. The big problem is going to be figuring out how to get my aching back over the barriers. I know it seems odd, but the one thing that sets off my back pain is jumping - well actually it's the landing. Even a small hop over a one foot high obsticle is a big deal. I've been hitting the gym and even doing a little running in hopes of making my back strong and flexible enough to last the season.

I'm going to buy some PVC tonight so I can build a small practice barrier. It's going to take some practice.
Posted by mikemc at 8:11 AM No comments: