Taking Care of Your Stuff

Melony, Sam, Sophia and I went up to the cabin on Saturday only to find a wet basement floor and a leaking valve at the main shutoff. Seems like sub zero weather proved too much and water in the ball valve froze consequently cracking the brass body. My first reaction was the typical “why me” whining: “why did I build this place,” “why is it always something,” but after I got that out of my system my attitude changed for the better. This perspective shift is in no small part due to the book Shop Class As Soulcraft by Matthew Crawford.
Crawford is a PhD motorcycle mechanic, so much of what he writes goes over my head – both scholastically and technically – but occasionally I do catch a glimpse. The chapter entitled To Be Master of One’s Own Stuff has proven especially enlightening and useful. Instead of being a headache, the plumbing problem now became an opportunity to improve my competence (I wouldn’t call it mastery) at taking care of my possessions. I built the cabin and now I need to take care of it.
After a conversation with my cousin Andrew Liske http://www.pipeyourdreams.com/ a plumber down in the Bay Area (and incidentally the guy who installed the cabin pipes) I came up with a repair plan. Sam and I went back up the next day, cut out the broken valve, un-sweated the PEX-to-brass fittings (which we needed to re-use) cleaned it all up and systematically put it all back together. The job took three hours with the two of us working at a steady pace. The job entailed some serious solder work, and I gave myself a 50-50 chance when I turned on the water. Thankfully no leaks. Being able to tip up the work while sweating the joints provided a gravity assist, which I’m sure made up for some poor technique on my part. At the end of the job I installed a heater coil on the incoming water pipe.
On the 1.5 mile walk back to the car Sam seemed very proud of himself. We had had a problem and he and I working together had used our brains and our hands to solve it. That’s a pretty damn good feeling. 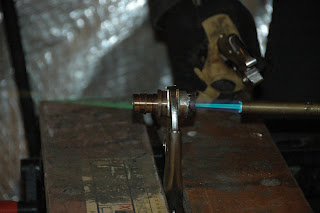 Un-sweating the old fittings - I liked the green flame 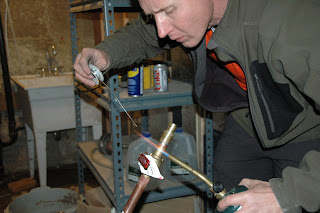 Gravity assist
Posted by mikemc at 9:31 AM No comments:

Getting Back on the Horse

Even Sophia's coach had to cover her eyes.

The worst part is that her older brother Sam is laughing so hard that he can hardly hold the camera straight. The best part is that she gets back up and goes again.
Posted by mikemc at 9:52 AM No comments:

Just Who is King

Listening to the health care debate reminded me of the Tom Waits line:

In the land of the blind the one-eyed man is king.

Posted by mikemc at 3:31 PM No comments:

Check out this awesome video:

The Greenwave and the Pre Green are genius. Contrast that to my old town of Redmond, the self-procalimed Biking Capitol of the Northwest, which doesn't even have bike lanes.

Like the narator says: if you make biking the fastest and easiest way to get around people will ride bikes.

Why do we Americans have to stumble through the dark for so long. Don't build roads, build bike lanes.
Posted by mikemc at 1:47 PM No comments: 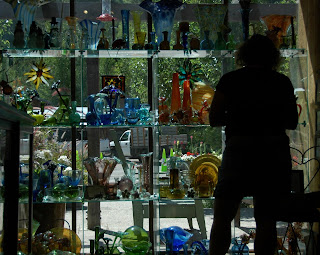 Finally getting around to editing some of last year's photos. I liked this image of the window at the Sundance Glass Studio.
Posted by mikemc at 10:26 AM No comments:

60 Channels And Nothing On

I have to confess to loving television. TV is entertainment and entertainment is a good thing. I don't see anything wrong with sitting down for an hour of TV before bed, but what amazes me is the amount of total crap that floats around out there. I was just about to give up on the whole notion of television when I came across the HBO series Deadwood.

Currently it's 20 degrees outside and even though some people do I'm not getting on my bicycle when it's that cold, so now I'm trapped on the trainer. Time on a bike trainer goes by very slowly; I speed it up by watching movies or videos of television series'. The TV series route is better because if I can get hooked on a storyline I find myself looking forward to the next training session. Two years ago I got hooked on Six Feet Under," last year I wallowed looking for something good, this year I'm loving "Deadwood."

As the name suggests Deadwood is set in the Outlaw town of Deadwood South Dakota during the 1876 gold rush and features Wild Bill Hickock and Calamity Jane as main characters. Everybody and everything in the show is filthy dirty, John Wayne probably wouldn't have approved, but I figure it's probably a more accurate depiction of what the wild west was really like.

The storyline is solid and the characters are engaging, and so just when I thought it was all junk I found a little treasure that made me eat my words.
Posted by mikemc at 9:53 AM No comments:

I recently came across a very timely passage:

Your are too just, Lord,
for me to dispute with you,
but I would like to talk with you about justice,
Why do the ways of the wicked prosper?
Why do all the treacherous live at ease?
You have planted them and they have taken root;
they grow and bring forth fruit.
You are near to their mouths
but far from their hearts.

In 2007 (the latest year I could find data) the median family income here in the United States was just over $50,000. In that same year, according to Fortune Magazine, Tiger Woods took in $100,000,000 for endorsing sugar water, poorly designed and cheaply made shoes and, I must admit, fairly descent razors. So it would take the average American family 2000 years to earn what Tiger got (note that I don’t use the word “earn” in reference to “the Tiger”) in just one year. I believe that this disparity has given Mr. Woods a mental illness I call celebrityitis.

When we garner these incredibly disproportionate salaries on sports stars, CEOs and the lucky few actors and musicians who “make it” we are in essence driving them crazy. Michael Jackson is the classic example. Sure Mike was a good singer and a great dancer, but does that make him 20,000 times more valuable than the guy mowing his yard. If you surround yourself with yes-men and you take in more money in a week than most of your neighbors will see in a lifetime you could either emulate Paul Newman and shake your head at the ridiculousness of it all and use your money for the greater good or you can be like Michael and Tiger and convince yourself that you are special – not of this world – and therefore deserving.

One read of Tiger’s comments regarding his infidelity http://web.tigerwoods.com/news/article/200912027740572/news/ reveals a guy completely disconnected from reality. Those of us in the real world have to face the consequences of our actions; Tiger apparently likes the goodies but squeals at the prospect of paying the price. Tiger made a Faustian deal: to date he’s taken in nearly a billion dollars for selling the clean shaving, clean living family man (i.e. the Tiger Brand) in return he sold his privacy. All he had to do was keep it in his pants. Not only couldn’t he keep himself in check, but when he gets caught he has the gall to release a statement, devoid of any apology, which blames his problems on the “media.” Talk about biting the hand that feeds.

We certainly don’t do celebrities any favors by rewarding them with ridiculously disproportionate salaries and gawking at photos of them walking their dogs in gossip magazines. In fact I think we drive them crazy. It seems like it’s about time that we made our own lives so interesting that we don’t have to resort to idolizing a guy simply because he can hit a little white ball with a metal club.
Posted by mikemc at 10:36 AM No comments: