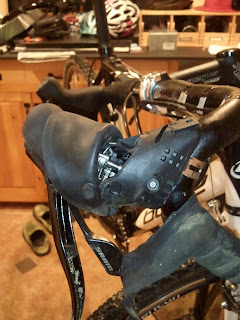 I showed up at the MFG Raceway CX at Marymore with only fifteen bucks in my thin wallet, so the first order of business was to saddle up and ride to the nearest ATM. Fortunately I’d arrived ninety minutes prior my race and, doubly fortunate, the bank machine was only about two miles away. Unfortunate was the three bucks I had to pay to make a withdrawal, but that’s a different story. A different story entirely.

After paying up, I skirted under the danger tape and hit the soggy course. Kore Kross has gotten me accustomed to the funky off camber hillsides, claylike slime and zero friction when wet blue paint; I felt like I had a bit of a home field advantage, excepting, of course, all the other guys who do Kore Kross. The layout of the course was nice, no crazy tight turns or barriers placed on uphill sections, the short wooden stairway was right up my alley – the more running the better I say.

I took two solid laps and then returned to the car where I screwed my rear skewer into the trainer and worked on getting my heart rate up. I’ve found that I have to push through what I call the “race heart attack” before I can really settle in and start pushing hard. It happens about five or eight minutes into the race, suddenly I can’t seem to get enough air and I swear I’m going into cardiac arrest, it only happens once and if I can push through it I’m set for the remainder of the race. I’ve had my ticker checked out on a stress test – I watched my heart beat in real time, that was cool – and I’m totally fine, it’s just one of those things. Anyway my plan now is to crank up my heart rate pre-race, so then I’ll be good to go by the time the starting gun fires.

I was only on the trainer for fifteen minutes when the announcer said that all ten thirty racers should be at the starting line. Heck it was only ten fifteen. I undid the bike and rolled over to the start line. I entered at the back and started nudging forward – using the tactics I learned in the eighties to get front stage at the big arena rock concerts. So many teammates, I think there were seven or eight of us in the forty five plus race. The rain had stopped but I was cooling down fast, start the race, start the race.

I was in the rear third of the pack at the start, but I got a number of lucky breaks during the lead out drag race and rounded the first turn in the top third. I only use one chain ring in the front and had switched to a thirty four tooth ring, it looked kind of tiny, but combined with a eleven twenty four in the back I had more than enough gears. I was rolling along really well when I slid out while paralleling a slimy slope. I got up fell again, lost my chain, fixed that got up started pedaling only to realize that my left shift/brake lever was broken off. Good thing I don’t have a front derailleur. Midway through the second lap I broke the shift mechanism on the right side. Now I was down to one brake and one gear. Luckily it was a good gear.

As I came around by the parking lot I seriously considered just ducking the tape and going home – mechanical failure – who would blame me. The biggest problem I had wasn’t the lack of brakes or gears it was holding onto the broken shift lever. I normally ride on the hoods and my left lever was held on by rubbery rubber. If that lever came off completely I was going over the handlebars.

Honestly I don’t think I would have placed any higher had I had a full set of twenty gears. Riding with a single gear wasn’t a terrible handicap. Maybe I could have spun up the hills a little better, but really it was no big deal. I never really got used to that SRAM Doubletap stuff anyway; breaking the levers gave me an excuse to switch out to Ultegra. Dang those shift levers are expensive.
Posted by mikemc at 10:29 AM No comments: