It’s 6:30 AM and for some reason I was just remembering the morning I went dumpster diving with the found objects artist Baby Smith www.artworkslive.com in Dublin. We stripped out the Philips head on my Leatherman trying to remove a couple of brass hinges from an enameled door.
Posted by mikemc at 6:39 AM No comments:

You can’t medicate your way out of symptoms that you’ve behaved yourself into.

-Dr. Carolyn Dean
Posted by mikemc at 8:44 AM No comments:

Like many in this country I suppose, I’ve been talking health care with family and friends quite a bit lately. I must confess to a bit of frustration at times as it seems to me that the need for health care reform is simply obvious – like the need to treat a malignant tumor.

I’m a big fan of free market economics, the laws of supply and demand naturally gives the customer the best product at the best price. Whether or not that customer really gets what they think they are getting or whether or not price they pay is an accurate reflection of the cost of the product, well that’s another story. But on a conceptual level I like the law of supply and demand. Obviously there are two constraints when it comes to supply and demand: one you must have a supplier who can deny sale of their product or service, and two you must have a demander (i.e. customer) who can walk away if the product or price is not acceptable. When it comes health care neither criteria is met.

Say a commuter train goes off the rails and one of the injured passengers ends up in an emergency room with a sucking chest wound, he’s not in the position to haggle over price and what type of services he’s willing to pay for. Conversely the doctor is morally and ethically bound to treat that chest wound regardless of whether or not the injured passenger is capable of paying for the services. The free market model just doesn’t work for health care.

For years the model we’ve had here in the United States was health care insurance – typically provided as part of an employee/employer compensation package. This worked fairly well when medical care was relatively cheap, but it begins to break down as medical technology becomes more advanced, and consequently more expensive. Take for example the MRI, if a parent shows up in the emergency room with a child who has suffered head trauma and the doctor advises three MRI’s – at three thousand dollars apiece – that parent is going to sign on the bottom line and worry about paying later. Twenty years ago a parent didn’t have to make this decision as MRI’s didn’t exist. As the cost of medical care goes up the insurance companies start denying coverage for certain procedures (MRI’s for example) and increasing premiums, as this happens people start losing coverage due to an inability to pay, as this happens we get more uninsured, as the number of uninsured goes up so do the premiums (as somebody has to pay for the cost of the uninsured) and that raises the number of uninsured and so it goes. How do the insured pay for the uninsured, consider the following example.

Three guys, Bill, John and Rick all get into a car accident and sustain head trauma. They all go to the hospital where the doctor advises MRI’s for all three. Now Bill works for a large company and has a so-called “Cadillac” health plan which covers MRI’s. John, on the other hand, works for himself and has a bare bones health plan that doesn’t cover MRI’s. Rick works a low paying job and has no health insurance whatsoever. So let’s say each MRI costs three thousand dollars for a total of nine thousand for the three guys. Now the hospital is only getting money out of the two insured guys so they bill each of them forty five hundred. In the short term Bill don’t care as the cost is invisible to him (he should care in the long run because as costs increase eventually his “Cadillac” plan is going to devolve to a bare bones plan). John cares a lot because he has to dig an additional fifteen hundred out of his pocket. Rick walks away (he really doesn’t walk away, he may get sued for the three thousand, but you can’t squeeze blood from a turnip). So it’s the John’s out there – the guys who have insurance and pay their bills (both the premiums and the cost of uninsured procedures) – who are getting screwed. I’d be willing to bet that that’s a lot of Limbaugh listeners out there.

There are three ways to fix this: one, socialized medicine; two, requiring every citizen to purchase insurance; three, a government run health insurance program. I’ve lived in a country with socialized medicine and I don’t want that. Many countries with socialized medicine rely on private companies in the United States to provide the medical breakthroughs. In other words our free market approach to medical technology provides many freebies to countries with socialized medicine. So I don’t want that. Requiring, under penalty of law, that an American has to purchase anything, let alone something from a private company, is absurd. If I start a bicycle company I can provide one at a great price if everyone in these here United States is required to buy one; the whole concept is silly. So that leaves us with the government run program.

The government program isn’t a perfect solution as it puts the immense influence and buying power of the US government up against private companies. This would indeed put the private companies at an inherent disadvantage; it’s no wonder that they squealed so loud whenever the public option was proposed. This is also kind of a bad deal for the medical profession as a government run program with massive buying power would negotiate lower prices, which would result in lower compensation for medical professionals. So admittedly it’s not a perfect solution, but it’s the only one that isn’t fatally flawed.

The job of our public servants is to do the greatest good. I believe that it is possible to introduce a public option without heavy impact to the medical and health insurance industries. They would obviously have to work together to find this solution, and therein lies the rub.
Posted by mikemc at 9:38 AM No comments:

Well after many starts and stops, backpedals, second thoughts and third thoughts I’ve finally gone all in on this writing thing. The world of fiction writing, I am discovering, is horribly backwards: you submit a story, wait four to six months for an editor to respond, ninety nine times out of a hundred the answer is “reject,” but the one out of a hundred that does get published they pay you in copy (getting paid in copy means they give you a copy of the magazine). Believe it or not sometimes you even have to pay to have your story considered – not published considered. It’s a tough way to make a living.

I’ve come to the conclusion that in order to be a writer you have to have something to say. I should be more specific, you should have something worthwhile to say. I suppose this is true of any art form: art is anything that makes a worthwhile statement. That’s probably as good a definition as any I’ve heard. I certainly have stories to tell, whether or not they are worthwhile, well I suppose that’s up to the public.
Posted by mikemc at 10:03 AM No comments:

I’ve been trying to think of a mammal other than we humans that drinks anything other than water. So far I haven’t been able to come up a single example. I’ve read that Americans get twenty five percent of their daily caloric input via liquid, which seems a little out of whack because we are one of the only, if not the only, member of the animal kingdom who gets any caloric intake from liquid.

Think of it, soda, energy drinks, even fruit juice and dairy are recent additions to the human food chain. Fermented and distilled spirits are fairly ancient, but how many folks back in the day could afford to drink beer and wine on a daily basis – I’d wager not many. If you got in a time machine and went back two thousand years you’d be drinking water almost exclusively.

Putting two and two together it seems to me that the very first thing a person wanting to lose weight should do is to drink only water – and plenty of it. Right there most of us could easily lose two hundred to five hundred calories a day without hunger pains and cravings (unless you crave caffeine and sugar). You’d also have the side effect of reducing the amount of weird chemicals that the folks and Coke and Pepsi seem hell bent to put into our bodies.
Posted by mikemc at 10:14 AM No comments: 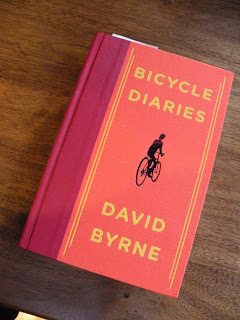 I recently finished the book, Bicycle Diaries by the artist David Byrne. It was a gift from my in-laws and they made a great choice. Byrne writes about riding his folding bicycle around cities such Berlin, London, Istanbul, as well as his home town of New York. Contrary to what the title might suggest the actual act of riding a bike rarely comes up. Instead he gives the reader an artist’s eye view of city planning and local history as well as a kind futurist view of where we are and where are we going.
Being a left-brained engineer type I enjoyed to opportunity to view the world through the eyes of an artist, especially one as academic (an academic artist – is that an oxymoron?) as Byrne. It reminds me of the time I had some photos in a studio show and was invited to be one of the gallery artists. We held meetings during which I was continually fascinated by the way these guys and gals thought. We reached proper conclusions but their priorities and concerns were typically issues I’d never even considered. It’s refreshing to take off your blinders on occasion, and at least attempt to see the world through the eyes of another (perhaps our Senators would benefit from this advice).
Fiction creates just such an opportunity. Reading fiction allows you to see the world through the eyes of another. Good fiction puts you behind the eyes, and allows you understand, if not sympathize, with actions, which if viewed from the outside, seem completely out of whack. If you don’t read you simply cannot make sense of this world. Heck that’s what storytelling is all about – an attempt to explain some small part of this weird place we all call home.
Posted by mikemc at 9:54 AM No comments: