Back in the Gym

I'm fortunate to have a descent free weight room near my house and the time to use it. My chronic back has returned, and if I'm going to be jumping on and off the bike during cross season I'm going to have to improve my core strength.

This Brian MacKenzie guy is getting a lot of attention lately. He's applied the crossfit approach of short high intensity efforts to endurance sports. I tried this approach when training for the 2009 Cour d Alene Ironman. I went this way because of my propensity for stress fractures and I wanted to minimize the mileage yet show up at the starting line fit and ready for a PR. Inevitably the stress fractures came and I didn’t race, but I don’t think I was as fit as I could have been. Yes I would have finished the race but I don’t think I was capable of a personal best.

In 2010 I combined short high intensity workouts with longer, what I call “deliberate” workouts. A deliberate workout means that you are making a focused effort, maintaining proper body position and working at a high turnover. Once again I didn’t race Cour d Alene due to a stress fracture, but I do believe that I was as fit as I’d ever been.

In 2011 I switched to bicycle racing and now have twelve race starts under my belt. I have yet to do a Masters start and consequently have been lining up with guys half my age. I think youth gives you a lot of leeway, especially when it comes to core strength and flexibility. I believe that my poor flexibility and deteriorating core strength are limiting me to mid pack finishes, and so it’s back to the gym.

Many experts say that you don’t want to push weights during the season, we’ll see if they are right.
Posted by mikemc at 6:23 AM No comments: 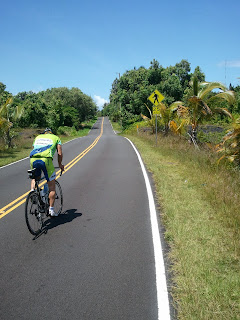 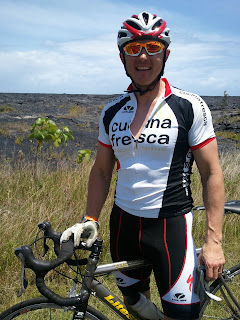 Went over to town of Hilo on the Big Island of Hawaii last weekend to visit a friend. I was looking for a break from our dismal Pacific Northwest "what happened to our spring" weather, and despite copious amounts of rain the clouds parted for a sunny Saturday bike ride.

I went with my buddy's friend who had just gotten himself a Cannondale Super Six and so he lent me his previous ride: a Litespeed Tuscany. It was a nice comfortable ride that fit me perfectly, all I had to do was screw on my pedals. I was thankful for not having to go through the pains of renting a bike from far off Kona.

Wow is sure is nice to ride sans arm warmers. The sun just seems to give me energy, it's as though my skin is a sponge sucking up all those calories. We went seventy miles on rolling smooth roads, much of which was along the coast. A couple of times I had to stop in order to simply enjoy the view of the Pacific crashing against the black igneous coastline.
Posted by mikemc at 7:59 AM No comments: 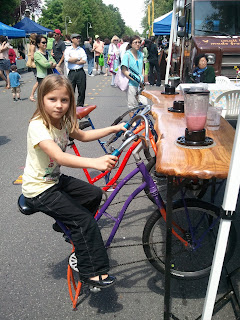 Sophia using human power to blend a smoothie at the Mercer Island Farmers Market.
Posted by mikemc at 7:52 PM No comments:

Back when I was doing endurance events I quickly learned that nutrition is everything. Just like a Ferrari goes nowhere without gas, an athlete will bonk and come to a near standstill without food. Cat 4/5 bicycle racing isn’t so much of an endurance activity and I’ve become somewhat lax in my pre, during, and post workout nutrition.

Yesterday I did fifty miles with my friend Lori up in my old stomping grounds: the Snoqualmie Valley, Sultan and Monroe, and I paid much closer attention to my fueling. Ten minutes before the ride I ate an almond butter and honey sandwich on whole wheat bread, during the ride I ate my usual mix of energy bars, Nuun and Hammer Sustained Energy and immediately afterwards I munched a PB&J and washed it down with sweetened green tea. Lori is training for Ironman Canada, which is all about consistency, and consequently we rode a cool, even 20 mph pace, and I felt great both during and after the ride.

Last Saturday I went out for two hours of hard hammering and come about ninety minutes in I began falling apart. I attempted to refuel on the bike, but it was too late, I’d already gone over the cliff. From now on I’m going to focus on taking in low GI foods before the ride, and will be sure to recover with some protein and high GI foods immediately after the ride.
Posted by mikemc at 9:15 AM No comments:

I’m counting down the days till the Tour, but I have to wonder: can anyone even come close to Contador? Funny how some athletes are loved for winning – Armstrong – while others are loathed for it – Contador. I’ll admit Alberto isn’t the most personable of fellas, but damn he rides with passion. I mean it’s like some mafia type is holding his mother hostage and saying “win or the old bag catches one between the eyes.” Alberto shows up every morning, rides each stage like he’s had a month of rest, neither gives quarter nor asks for mercy and he seems to be universally hated, whereas Armstrong showed up with an entourage and acted like a pompous rock star ass and he was the golden boy.

I’ll be cheering for Andy Schleck, but other than that one day last year when his “stomach was full of anger” he doesn’t seem to have that “either I win or I die trying” attitude that Contador – like Armstrong and Pantani before him – has. I remember watching an interview with Dick Butkus years ago and the interviewer asked him why he hit so hard. He said something to the effect that he just convinced himself that the guy with the ball had called his mother a whore and that he was going to kill that bastard, he said that he was going to make sure that guy never got up again. Contador hits the Alps with that same psychopathic attitude.

When it comes to personalities I doubt Armstrong, Contador or Schleck would be all that much fun to hang out with. If I could spend a day with a Tour rider I’d choose either Renshaw or Cancellera. Too bad Fabian can’t ride the hills; he would be a great face for cycling.
Posted by mikemc at 9:04 AM No comments: 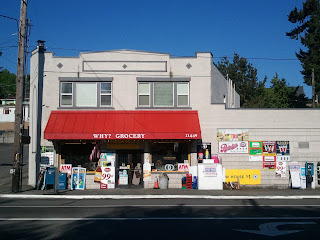 I was riding up Rainier Ave last Sunday when I spotted the colorful Why Grocery well-lit by the morning sun. I like riding by myself because I can stop and shoot a photo whenever I feel the urge. For now I'm using the camera on my Windows phone, but I'm looking at some super compact digitals - I like the Panasonic Lumix with the Leica lens.

Rode 32 miles yesterday with two 3 mile time trial efforts.
Posted by mikemc at 10:47 AM No comments: 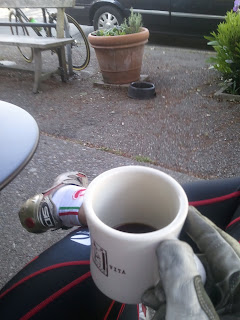 Left the house early yesterday for a blue sky bike ride around the south end of Lake Washington. I'd run out of coffee at the house, and so I set out on my forty mile ride fueled with green tea. Come mile twenty I was jonesing big time, and fortunatly found a nice coffee shop near Seward Park. One good thing about living in Seattle is that you're never more than three miles from good coffee.
Posted by mikemc at 8:53 PM No comments:

It’s better to blow up than suck up – Mark Twight

Here in Seattle we have Thursday night criterium races at Seward Park – a green peninsula jutting out into Lake Washington. I’ve been racing the 5:30-6:00 slot; the field is primarily beginners and Cat 5’s, but, intermixed in the wobbly group are usually nine or ten solid competitive riders. As the weather improves more and more inexperienced riders are coming out and it’s beginning to get scary. Last Thursday there were two accidents – both caused by the same team – and numerous near accidents. I had to yell at a guy – once again from the same inexperienced crew – to ride straight. I’m not much of a yeller, but Jesus Christ enough was enough.

I’ve been fairly wimpy on these Thursday night rides, hanging in the back not wanting to take any chances and consequently I’ve finished mid pack. Last week I went out harder and found myself up front doing a lot of pulling. Funny thing about bike racing is that you only know what’s going on in front of you; you have no idea what is behind.

We run fifteen laps and come about lap thirteen all of these guys I haven’t seen in the past twenty five minutes start moving to the front, I’m thinking where the hell you all been. I guess this is strategy, or strategery in the post Bush lexicon. I don’t know, sucking wheel for thirteen laps and then blowing past the workhorses seems a bit lame to me. On the other hand, I haven’t registered a single point in the standings this year so I guess straterery puts you on the podium.
Posted by mikemc at 10:25 AM No comments: 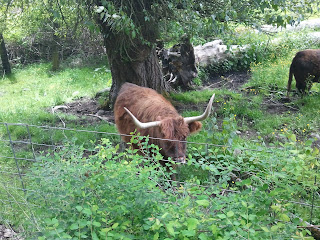 To say that we’ve had a wet, cold, windy spring here in the Pacific Northwest is to put it mildly. Yesterday the cycle of pain finally broke – I actually removed the toe warmers from my bike shoes. Funny how damn good sixty degrees can feel.

I’m on my bike six days a week and consequently have become very downtrodden by the merciless, dare I say cruel, weather of 2011. Wind is fine. Rain is fine. Cold is fine. But wind, rain and cold all at the same time, only flagellation can compare.

To roll 21 down smooth country tarmac, sun on your back, a cool breeze in your face – nothing better.
Posted by mikemc at 7:53 AM No comments:

I received the notice that my application to upgrade from Category 5 to Category 4. This was my goal for my first season of road racing, but now that it’s official I’m a bit apprehensive thinking “gee I’m just getting competitive at Cat 5 now I’m back to being in the back of the pack.” Cat 4 races are longer and more crowded, but I anticipate a much safer ride as I’ll be out there with better more experienced riders. Onwards and upwards.
Posted by mikemc at 9:33 PM No comments:

Baring a victory in the Pinewood derby (using a car that my dad had built), I’ve won nothing.

I entered my first two cycling road races with the same participant attitude and I quickly realized that just being there for the scenery wasn’t going to work. Unlike marathons and Ironman competitions where so-called victory is in finishing a cycling road race is a true race, either you are a racer or you’re an obstacle; there isn’t any place for “participants.”

I’m finding that this is not an easy adjustment.
Posted by mikemc at 12:28 PM No comments: