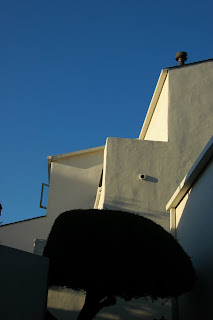 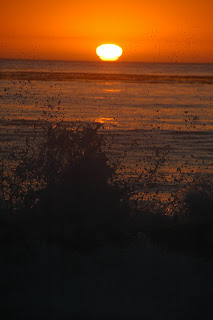 Caught a bit of the California Indian summer down in Carmel; the locals told us that the ninety five degree temperatures we were experiencing were pretty darn far from normal. It's been cloudy and cold up here in the Northwest so a little heat and sunshine was received without complaint.
Carmel started out as an artist's community and it maintains the look and feel of a place predating fast food and cheap tscotchkes. I'm sure that McDonalds and Super Eight would love to sink their mitts deep into the place; I'm sure that it takes more than a little effort by civic leaders to maintain authenticity. The winding streets and give a damn architecture reminded me of the tiny Beaux Arts community located adjacent to the ever growing city of Bellevue, Washington.
With the exception of a few newlyweds, Melony and I definitely were the youngsters. When I went out for morning coffee the typical scene was a fit woman in her late fifties-early sixties decked in the latest fitness gear including cap and expensive running shoes leading a dumpy man wearing cargo shorts and grass-stained white athletic shoes. Carmel seems to be the vacation spot for the guy who long ago made a Faustian deal - money for your soul.
I'm glad to see that these tiny slices of life endure, that they overcome the pressure to be like everywhere else.
Posted by mikemc at 9:07 AM No comments: 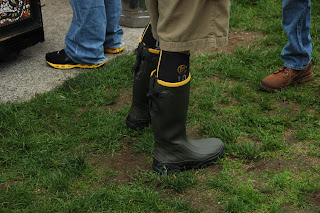 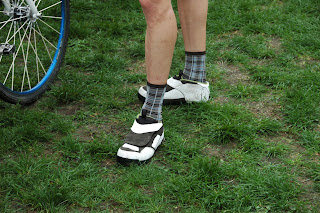 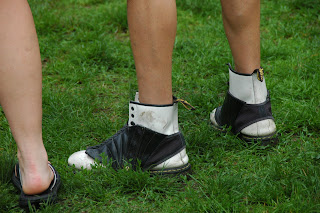 Last weekend my son Sam and I attended the Starcrossed cyclocross series in Marymore park. It was the same night as a Grateful Dead (I didn't even know that these guys were still around) concert and as we crawled along behind a Microbus I commented to my son, "who the hell are all these dopers anyway?" I had momentarily forgotten that I'd attended a Dead concert back when Jerry Garcia wasn't just an ice cream flavor, but an actual real live person. I guess we're destined to turn into our parents.
Anyway I love finding new cool groups of people who live colorful in this monochromatic age, and cyclocross racers and fans certainly fit the bill as being colorful. We live in crazy times, a period in which outlandish lies are sold as truth and when appearance is valued over substance. It's hard not to become cynical. All I can say is thank God for the honest few, thank God for the few who wear crazy shoes, and thank God for those who race hard and smile when they cross the finish line.
And to the Deadheads I say the Dead are dead, let 'em rest in peace.

Posted by mikemc at 8:17 AM No comments:

Kris, Tina, Wendy and I ran the Cle Elum Ridge 25K Trail Run on Saturday – I call it the Cle Elum Ridge 17 mile Trail Run because the course was a mile and a half long. Based on the few organized trail runs that I’ve participated in I can say that so far two constants hold true: cool people and beautiful women. Nearly all of the gals had a dog on a leash, a big white smile and a halo-like glow that comes from ample time spent in the out of doors. If I were a single fella I’d be at one of these races every weekend.

It’s been extraordinarily wet, even by Pacific Northwest standards, recently and I expected a muddy course, but what I didn’t expect was all the standing water. The race course was on an ATV track and those knobby tires and internal combustion engines leave behind a rocky, potholed, stair-stepped mess. Luckily we only encountered only two riders as I think most of the bikers tuned into our presence and wisely chose other routes. The course also involved a lot of monster climbs most of which were best climbed at a fast walking pace in order to spare the calves and thighs.

My disadvantage on a hilly course is the downhill portion – I just can’t seem to let ‘em go and fly downhill, and consequently lost a lot of time on the descents. Concern over more stress fractures combined with a fear of rolled ankles and a general lack of catlike reflexes keeps me overly constrained when going down. I followed Tina for a while and was amazed at how nimbly she floated downhill: she was skipping and dancing while I was skidding and sliding.

I carried a Nathan Quickdraw handheld water bottle which I’d bought the day before, and filled it with Cytomax. I liked the handheld, it was easy to carry and comfortable, but disliked the Cytomax. The last time I used Cytomax was 2002 on a climb of Manaslu in Nepal and had no trouble, but on the run it upset my stomach. Perhaps it’s better used at lower intensities.

My finish time was 3:23 and during that time I took on 20 ounces of water, two and a half gels, two Oreos, a handful of gummy bears and two fun sized Snickers bars. I might have been a bit light on the hydration but other than that I felt really strong at the finish and had no signs of bonking.

Long trail runs become kind of a solo event and after the first aid station at mile 5.6 Kris, Tina, Wendy and I were all kind of on our own. It’s cool that even though each of us ran our own race we finished sequentially, each of us just minutes or even seconds behind the other. Jim Varner puts on a great race, and I felt fine for the entire seventeen miles. I think next stop will be the Orcas Island 50http://orcasisland50k.blogspot.com/K.
Posted by mikemc at 7:48 AM No comments:

Thirteen on the Thirteenth or What's SUP

I don’t remember my parents ever preaching the gospel of commitment and determination, but for some reason or another my three brothers and I all have an almost masochistic aversion to quitting. Not following through is anathema to me and I figure that’s a good thing; I’ve held on to some stupid ideas longer than I should have, but on balance I’ve come out ahead, so I can’t complain. With that said, it was with great consternation that on Sunday I walked away from the Round the Rock – a thirteen mile standup paddleboard race around my home isle of Mercer Island. In my defense it was a pretty stupid idea to begin with, I was wholly unprepared and completely clueless; this was a major endurance race and my sole preparation had been a ninety minute chill SUP lesson in Elliot Bay.

I have a whole suitcase full of really good excuses for not doing the race, but the short of it is that walking away really soured in my stomach. To make matters worse I felt like my son saw me as a hypocrite – that I push commitment on him but in the end I bail. Unfortunately the fact of being a parent is that you can do fifty awesome things and your kids couldn’t care less, but you screw up once and they pounce like a crouching tiger. So to make a long story short, yesterday I put Sophia on the bus, strapped the borrowed board atop the Subaru, drove to the beach at Luther Burbank Park dipped the board and started paddling.

Despite some headwinds on the last four miles, the day was a good one for paddling; the thirteen and a half mile circumnavigation took me three hours and fifty minutes. I have to say that the Mercer Island shoreline looks rather like something from Martha’s Vineyard, I half expected to see the Kennedy clan playing touch football out on one of the manicured lawns. Who are these people?

All in all SUP is good simple fun, much easier than lugging around a heavy bulky kayak. Too bad the price of admission is so high – a descent board will cost you at least fifteen hundred.
Posted by mikemc at 9:23 AM No comments: 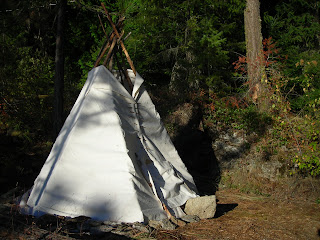 Recently my son and I spent a sunny morning in Northern Idaho building a tipi. It was a place for him and so we made the opening big enough for a kid, but too tight for an adult.

Since I was a kid I've been enthralled by Native American culture, and am especially drawn to the great tribes of the Western Plains. I'm sure I'm romanticizing a bit but it seems to me that the tribal culture was more "real." I think there is something inherently positive about a society in which everyone lives in a home of their own creation. Your character is on full display when what you own is a reflection of the pride and care you take in living life.

Modern Western society is so full of B.S. We've created a society of illusion - one in which you are what you appear to be, which is often in direct opposition to what you actually are. Line up Ronald Reagan, Sylvester Stallone, Arnold Schwarzenegger and John Kerry and ask "who is the war hero?" Chances are you wouldn't get the right answer. Love him or hate him it doesn't matter, the fact remains that Senator Kerry is a bona fide warrior - he has the medals and scars to prove it - but that just never caught on with the U.S. public because he doesn't fit the Hollywood mold.

If anything I hope I've taught my children to take pride in what they do, because in the end we are what we create, and what you say, claim or brag makes no difference.
Posted by mikemc at 6:48 AM No comments: