Baby We Were Born to Run

One hundred and two degrees here in Seattle today, we here in the Northwest just aren’t used to this kind of heat. I went for a run this morning – it was a mere ninety two at the time – along the old railroad grade near our house, and boy howdy was it nice to be out with nothing more than two shoes, a pair of shorts and a water bottle. I love running in the heat, it gives me what I call a good sweat, the kind of sweat that does what it is designed to do: evaporate and cool the body. It reminded me of just how well the human machine is designed.

I can’t even speculate as to how many times I’ve been accused by folks who neither engage in nor understand endurance sports as a zealot who doesn’t know when to say when. The underlying argument is that we humans just aren’t designed to run long distances and that I’m ruining my body. What a load of nonsense. The more I run the more I appreciate the fact that we humans are born to run.

No matter what side of the creation/evolution argument you are on (I hope you’re on the evolution side, but if you’re not that’s cool) the end result is the same: we were either created as runners or we evolved into runners. Prehistoric man didn’t saunter, he didn’t ramble, nor did he shuffle, he ran that’s how he got around, and we have the same physiology as that guy; many of us have it buried beneath a layer of fat, but it’s there none the less. Homo Sapiens have been a physical animal for about two hundred and fifty thousand years, he’s been a couch potato for about forty; I think I’ll bet on the two hundred and fifty thousand.

I suppose running isn’t for everybody, but for me I was born a runner and I’ll die a runner.
Posted by mikemc at 9:23 PM No comments:

In It To Win It 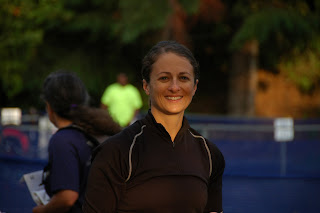 I have a good friend who says “adventure isn’t a race,” but on the flipside a race is a race, and I have to ask myself if I’m not racing then what am I doing on the course. I guess I should backup here; I’ve done a number of marathons, an ultra marathon, two Ironman races, who knows how many century rides and even a double century ride, but I’ve only participated I’ve never raced. If somebody passed me who cares, certainly not me, good luck brother, more power to ya sister, have a nice day, but lately I’ve been asking myself, hey man if you’re not trying to win then what exactly are you trying to do.

This line of thought really came to a head this past weekend during the Hagg Lake Triathlon down near Portland. I couldn’t do the race due to a lower back pain, but I went down with my two friends Stephanie and Piper and Piper’s high school buddy Jenna. The thing about Steph and Piper is the fact that they showed up Saturday morning ready and able to win the race – in the end Piper did win and Steph placed third. I mean they were in it to win it. This is totally foreign to me.

I’ve never entered a race with even the faintest idea of winning the thing I’ve always been the guy who was simply happy to be there: you know the line every finisher is a winner. I have one more Ironman in me and I have to ask myself just what am I doing out there. Currently I’m in the no man’s land somewhere between qualifying for the World Championships at Kona and simply crossing the finishing line in under seventeen hours. This is an eight hour gap.

I suppose the real question I have is how much is physical and how much is mental. No matter how many baskets I shoot in the driveway I’m never going to play in the NBA, this is just fact. No matter how many miles I ride I’m not going to ride the Tour. So what about being competitive in my age group in Ironman: in other words if I train harder and smarter and become willing to tolerate more race day pain would I be able to be competitive or is it a hopeless cause.

Before I step onto that beach in Coeur d Alene next year I’m going to have to decide am I in it t
o race or am I just out here for a long day with some nice people.
Posted by mikemc at 6:13 PM No comments:

Email ThisBlogThis!Share to TwitterShare to FacebookShare to Pinterest
Posted by mikemc at 6:09 PM No comments: