I knew a guy who needed a big half inch drive drill for one job so he went down to the Home Depot bought the most expensive one on the shelf, used it and then took it back. He was very proud of himself for “sticking it to the man.” Something about the transaction bothered me, but, like most things, it took me a while to figure out what that something was.

Me I’m a rule follower, and I guess it bugs me when I see folks who don’t play by the rules being subsidized by those who do. The use of that drill wasn’t free, Home Depot just passed the cost of that returned item right on to me, and everyone else who plays by the rules. The Home Depot drill is a small example; a bigger example is the subprime mortgage mess, but it’s still the same principle: take what you can get screw the rest.

I’m a big believer in the Buddhist philosophy that all actions are interconnected. How you behave has a very real impact on others. We Americans are having a hard time realizing that there is no such thing as a free lunch, worse yet there’s no such thing as a cheap lunch or even an easy lunch. Our addiction to oil isn’t free it’s paid for in the blood of American servicemen and women. Our lust for cheap goods manufactured in third world countries is paid for lost jobs and foreign countries that now have us by the short hairs. Our love of fast and easy pseudo-food is paid for by through the roof health insurance rates and tax-payer funded prescription drugs.

The screw you attitude worked for nineteenth and twentieth century America, but in a twenty first century world that is literally falling apart, both physically and economically we here in the States need to get our act together and pull for the common good.
Posted by mikemc at 3:06 PM No comments:

Lately I’ve been reading about the financial crisis with the vain hope of trying to understand just a little bit about what went on and what went wrong. My conclusion is that two words can really sum up what happened: recklessness and leveraging. In an attempt to relate this debacle to the real world of ordinary folks I’ve come up with a couple of analogies:

Say you work for a small company and the entire future of that business rests on getting an important document across town, your boss gives you the document along with twenty bucks and says “get this to our client in one hour.” Now you have three options: do it yourself, hire a reputable currier, or hire a will work for food guy off the street.

You decide to go for latter of the three choices and pay a homeless guy five bucks and entrust him with the document, and to make matters worse you don’t even check to see if he has a vehicle with which to transport himself across town – you just believe him when he says he can do the job. You then go off to a restaurant and spend the remaining fifteen bucks on a ham sandwich and a beer all the while patting yourself on the back on how smart your decision was. An hour later you get back to the office to find out that the document wasn’t delivered, and that your company lost the contract and is consequently going out of business.

Now many right wing columnists – Charles Krauthammer for example – would argue that the responsibility for the demise of your company rests squarely on the shoulders of the homeless guy. I on the other hand say it’s your fault: you made a reckless decision with the prospect of making big rewards (i.e. fifteen bucks and a relaxing lunch), so take your lumps.

You would think that the father-in-law wouldn’t just give you the money, but would instead insist on some conditions, namely that you stop gambling what you can’t afford to lose. I think it’s safe to say that there are only 41 people in the country who wouldn’t insist on some conditions when giving out the $90,000, unfortunaely all 41 of those folks ended up as United States Senators.
Posted by mikemc at 10:39 AM No comments:

A Word to the Wise

Don't do your taxes while reading It Takes a Pillage by Nomi Prins.
Posted by mikemc at 1:48 PM No comments:

If You Ain't the Lead Dog

Sophia got a dog sled ride for her eighth birthday, here's a view from the sled 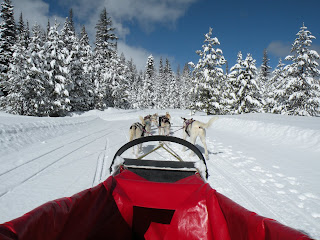 The only dog sledding operation we could find was down at Mt. Bachelor, near Bend, Oregon, so we packed up and drove six hours south. We arrived just after a major winter storm had dumped 40 inches on the resort, so we got in an incredible day of skiing in addition to the sled ride.
Posted by mikemc at 12:49 PM No comments: