The Good and the Bad

I suppose for every ying there must be a yang, the good and the bad, the bitter and the sweet. Lately I’ve been reading some of the “classics,” and just completed Robert Lewis Stevenson’s Treasure Island. Prior to that I tried, I mean I really tried, to wade through the absolute worst book I’ve ever had the misfortune to come across: Ayn Rand’s Atlas Shrugged.

I like books that are what they are and nothing else, and Treasure Island is an awesome tale of adventure - that’s it nothing else, nothing more. A mysterious old seaman, a treasure map, a double crossing pirate, a marooned sailor, an arrogant doctor and a stoic captain all give the young Jim Hawkins enough adventure – and riches – to last a lifetime. If you didn’t have to read it in school I recommend picking it up.

On the other hand, Ayn Rand’s nine hundred plus pages of cartoonish characters and unreal reality makes for one eye roll after the other. I’m sure that a lot of Rand fans would scream “oh you left winger you just don’t like the tale of rugged individualism,” but my argument is not with the story – stupid as it is – my problem is that the writing just plain sucks. The characters are flat – without any dimension or depth whatsoever - the dialogue could have been written by a fifth grader and the shallow silly world in which the story takes place makes Harry Potter seem realistic. Ayn Rand’s deep misunderstanding of the real world makes me wonder how she even managed to go to the grocery store for a bottle of milk. I suppose Ayn Rand gives all of us struggling writers hope: if that junk can get published well maybe – just maybe.
Posted by mikemc at 10:35 AM No comments:

Andrew Carnegie said that one should spend the first half of one’s life acquiring wealth and the second half giving it away (or at least something like that), well it seems like I’ve spent the first half of my life acquiring “stuff” and now it’s time to get rid of it. Downsizing certainly has been an eye opening experience. Honestly I can’t believe how much stuff I’ve collected in the twenty years since I loaded the trunk if an ’82 Malibu and drove west from Des Moines, Iowa. Over the past two weeks I’ve thrown away over five times the amount of “stuff” I started here with.

I must admit that tossing that “stuff” over the chain at the transfer station is a cathartic experience. It’s like I can feel the weight being lifted. You trade a little bit of your freedom for every item of “stuff” you acquire. Like it or not you have a responsibility to everything that you own: you have to maintain it, store it, lock it, etcetera, etcetera, and the more responsibilities you have the less freedom you posses. Some responsibilities, such and family and friends, are good: I’ll take a little less freedom in order to enjoy the benefits of great family and friends, but 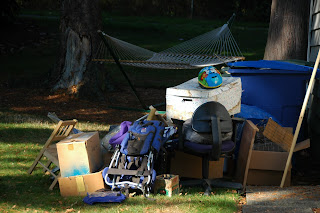 what about trading freedom for “stuff.”

Whether you call it “the Man,” “the Machine,” or whatever else, I do believe that there is a concerted effort among advertisers and corporations to convince us to trade freedom for “stuff.” They want us to believe that their “stuff” will make us happier than we were when we didn’t have their “stuff.” They want us to believe that whatever little freedom you had to give up in order to acquire their stuff was worth it, that it was a good trade. In most cases I’d say that it probably wasn’t.