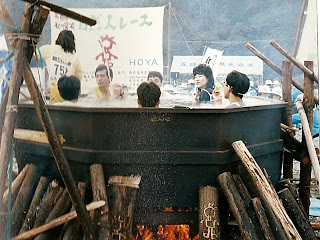 I've become increasingly bored with the 80's rock that I've been listening to - well since the 80's. Really how many times can I listen to Bon Scott scream about Big Balls without wanting to scream myself. So in an effort to broaden my musical horizons I've been listening to our local Seattle non-commercial radio station KEXP. Ironically one of the most enlightening things I've heard on the station was during an interview with Robert Smith, frontman for one of my favorite 80's bands - the Cure. Somewhere in the middle of one of his wondering monologues he mentioned death by repetition. Those three words kind of stuck with me and are now pushing me upwards as I try to crawl out of my twenty year old rut.
Posted by mikemc at 5:23 PM No comments:

We hadn’t gotten as far as we had hoped. I suppose the buffalo burgers had slowed us a bit, but camping at the pass was fine; we could make up the distance tomorrow. The temperature was disturbingly warm, so we pitched the tent without the fly, crawled inside and began boiling up our macaroni and cheese. The sky was a haze of salty starlight.
We had to share the one spoon, so eating took a little longer than usual, but I was wide awake and in no hurry. I took my time and did a better than average job of licking the titanium pot clean, but finally I had nothing else to do but slide into my aptly named mummy bag. Frustrated mosquitoes bounced off the nylon mesh just three inches from my forehead. The tent was small – we slept head-to-toe - and Bill rattled the gossamer shelter as he searched for a comfortable position. “You tired?” I finally asked my good friend.
“No.” He replied matter-of-factly. “How ‘bout you?”
“No.”
“Man that mac and cheese went down good. Was it the powdered stuff or the squishy kind?”
“Powdered.” I said looking at the stars. “You know what else is good?” I asked.
“What?”
“Cheetos.”
“Yeah Cheetos rock. What time is it?”
I reached for my watch and pushed multiple buttons until the blue face illuminated. “Uhhh almost midnight.”
“Whatta set your alarm for?”
“Four.”
“I’ll set mine for four thirty.”
Bill flipped on his headlamp and spent a long time fumbling with his chew can-sized wristwatch. I fluffed up the meager pile of clothes that formed my pillow and tried to sleep. No luck. “You wanna know what I’m thinking about?” I asked, gambling that Bill was still awake.
“What.” Came a drowsy reply.
“Hee Haw”
“The TV show?”
“Yeah you know with Buck Owens and that other guy?”
“You mean the fat guy?”
“Yeah. What was his name? Willy something I think.”
“No you’re thinking of Willy Nelson.” Bill said. “Yeah I can remember me and my dad sitting around watching that show. A bunch of Playmates dressed like Daisy Duke. Remember that board that smacked the guy in the ass?”
“Yeah I think it was like a fence board or something. Buck Owens and the Buckaroos. I think the other guy was Roy something.”
“What was the deal with the guys lying around on feed sacks? Remember that?”
Normally I’m not much for singing, but we were in the middle of nowhere so what the heck; I belted out “if it weren’t for bad luck I’d have no luck at all.” Then Bill joined in “Gloom despair and aaagony on meee.”
“Roy Clark.” I said between fits of laughter.
“Yeah that’s it.” Bill said before singing in his best Arkansas twang. “thipppt you were goooone.”
“No no that’s a different song,” I said. “That one goes like, wheere ohhh wheeer aare you tonight. Why deeed you leave me heere all alone.”
“That’s it!” Bill shouted and then together we sang, “Aye searched the werld over and thought aye found true love, then you met another and thippt you were gone.”
Bill and I were laughing like a couple of drunken teenagers. “Niiice.” I spurted out between giggles.
Our laughter finally gave way to the inevitable silence. “What time is it?” Bill asked.
“Bout a quarter after.” I guessed.
“You tired?”
“Not really. You tired?”
“Nope.”
Posted by mikemc at 4:16 PM 1 comment:

Bring Up The Gimp

Right now I have to question the Ironman lifestyle. Is it healthy to push your body to that level? Being injured has restricted me to swimming and weight training, and despite not running or biking I feel very fit and strong. During the dog days of Ironman training I often, not always, but often feel sore and exhausted. Right now, even though my training levels are low, I feel in superior health. I wonder...
Posted by mikemc at 9:45 AM No comments:

Melony and I take Halloween very serously, perhaps we took it a little too far with Sam. That kid is downright scary. 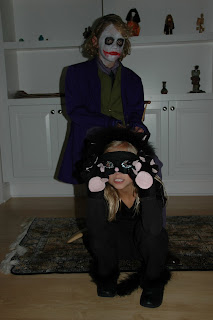 Posted by mikemc at 2:23 PM No comments: