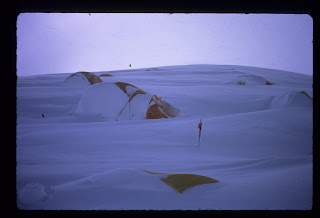 Dr. Peacock and Gregg Mortimer of the Australian team came up behind us making a total of six climbers at Camp 1. We were at nearly nineteen thousand feet and I was really feeling the lack of oxygen. When just sitting still in the tent I would get an almost panicked feeling of not having enough oxygen, the only way to make it go away was to do something physical: like digging. Over the course of that first afternoon at Camp 1 I dug out tent platforms and stacked snow walls. Good thing I did because we were about to get hit, and hit hard. The Patagonian Icecap can be brutal, so can Mt. Rainier in the wintertime, but I’d never experienced anything as ferocious as the storm that hit Camp 1 that night.

Luckily we hadn’t skimped on the quality of our tents and thankfully Brain and I had meticulously staked out and guyed out our little nylon home as I don’t think many shelters would have survived the 80-100 knot winds and the drifting snow. The wind would come in gust sounding like a train rushing headlong into a tunnel. It was like the wind was running you over, it would hit so hard that the tent would completely implode. Brian and I didn’t know if it was better to try to hold the tent up or to just let it flex. We tried both and neither seemed any better than the other.

We were fully dressed in our sleeping bags holding our knives ready to cut ourselves out if the tent finally gave way. It really did seem as though the wind had a personal vendetta against us and was trying to erase our presence on the mountain. It did seem personal. This was the most frightened I’ve ever been.

We all like to associate ourselves with the brave protagonists of literature and film. We identify with the quiet selfless hero while abhorring the cowardly braggart. But how many of us really know which archetype we would emulate when the going gets dicey. I believe that many people quit climbing because they don’t like what see in themselves; the mountains have taught them that they are not what they had believed themselves to be. On the other hand, the fortunate few have learned that they are stronger, more courageous and more loyal than they could have ever dreamed. Realizing that you have the mettle can develop into a sort of addiction: how far can I take this you ask yourself, what are my limits. Some people simply have to find out what they are made of, while others either don’t care or don’t want to risk it. 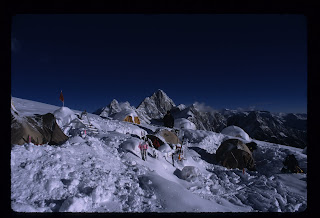 Morning finally came and with the rising sun came calm. We went out to survey the damage and found the entire camp nearly buried. Only the domes of a few brightly colored tents rose above the white landscape. Once again I was having trouble breathing so I took to the shovel and excavated not only our camp but half of the German camp as well. Andrew stopped by, his eyes were bloodshot and wild, he said that that was the worst night he’s ever had in the mountains – Manaslu would be his fourth eight thousand meter summit. He told the story of how he was in near panic while Gregg was “stripped down to his jocks” saying “ahh don’t worry mate this tent is good for 120 knots it ain’t over 100 out there.”
Posted by mikemc at 11:53 AM No comments: