I opened up my Seattle Times this morning to see a two inch headline stating:


Immediately I felt the hairs on the back of my neck rising.
Before I go any further I should state that I’m a rule following nut, furthermore I view myself as an ambassador of bicycling.  My goal, and the goal of my company – Greenlite Heavy Industries – is to promote cycling and you ain’t gonna do that by pissing folks off.
Now for the other side of the coin.  Bicycling for me is a passion, but my passion isn’t about turning pedals, instead my passion is all about being a free man.  The bicycle is a means to an end.

The American adult – despite vociferous clams to the contrary – is being squeezed into a continually shrinking box.  People can’t pay for the cars they drive so they borrow from bankers, they can’t fix those cars (even when they are not really broken) so they pay mechanics, they have to put gasoline into those cars so they look the other way when faced with the realities of the oil extraction business, they are anxious from traffic and in poor health due to a sedentary lifestyle, so they pay pharmaceutical companies to make it all better.  When you are at the mercy of bankers, mechanics, big oil and big pharma you’re pretty darn far from a free man.

In my life the automobile is necessary, I don’t deny that, but I see it as a necessary evil, to be avoided when possible.

A guy on a bike most likely isn’t contributing to the underwater financial situation of most American households, he isn’t contributing to air pollution and climate change, he isn’t putting money into the pockets of oil companies, he isn’t contributing to traffic congestion, he isn’t damaging the roads, and, more than likely, he isn’t downing jar fulls of prescription drugs to combat the ill effects of a sedentary lifestyle.  On the other hand, he is sweating, he is getting wet, he is feeling the cold.  I say give him the benefit of a doubt.  (Note that I use “he” in the gender neutral sense –writing he/she every time makes for awkward writing).


I don’t believe that cyclists should have free reign to ride in a dangerous or inconsiderate fashion, but bicycles are not automobiles and shouldn’t be treated as such.  Consider a spectrum wherein walking is on the left end and driving an automobile is on the right; I would place cycling very far to the left.  A cyclist, like a pedestrian, is very in tune with the surrounding environment (head phones should never be worn while riding), whereas the driver of an automobile is quite removed from his/her surroundings.  A cyclist can see, hear and even smell what’s going on around them, which I believe gives the rider some leeway.  For example when I approach the four-way stop near my house I can easily look and listen for opposing traffic, if it is clear I’ll roll through without coming to a complete, one foot on the ground stop.  When I’m in a car I can’t really see or hear what’s going on at that intersection, so coming to a complete stop, assessing the situation and then proceeding seems reasonable.  In other words we don’t expect pedestrians to make a complete stop at a stop sign, nor should we expect it of cyclists.
When I see headlines stating that bicyclists, many of whom don’t have a speedometer, are being pulled over and given a $103 fine for exceeding a 20 mph speed limit in a downhill zone I can’t help but feel a bit angry as this type of action only serves to impede cycling, instead of doing what we should be doing: promoting it.
Posted by mikemc at 11:12 AM No comments:

Peter Clancy from Woodinville Cycle comes out every week to shoot the cyclocross races, I always look forward to Monday morning when I can look at what he put in the can.  Usually there is an image that keeps me in line when I start wondering if maybe I should have pushed a little harder, dug a little deeper.  I think this shot shows that I was maxed out. 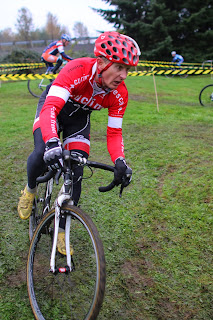 That's all there is and there ain't no more.
Posted by mikemc at 8:07 PM No comments:

I read a good article today:

The one concept that I really liked was to create little obstacles for yourself while going through the motions of daily life: walk instead of drive, run instead of walk.  Take the stairs instead of the elevator.  Do forty push-ups while watching TV.  Go barefoot.  The easy way is the soft way.

I find this MovNat stuff interesting.  May be worth checking out.  Go climb a tree.
Posted by mikemc at 3:31 PM No comments:

“What’s the difference between a golf course and a cow pasture?  Six months…evidently.”

Never has this one suffered so much for so little.  Seattle area cyclocross racers ventured out to the Snoqualmie Valley to compete in the SCX race at the now defunct Tall Chief Golf Course.  I expected mushy conditions as the old golf course sits atop spongy bottomland, but I didn’t expect the grassy, clay-like crud that locked up nearly every moving part of my bicycle.

We Cat 4 Masters only had to endure three laps, thank God, no way could I have made four without stopping to clear out the brakes and drivetrain.  The mud was especially sticky, but I think it was the freshly mown grass that really gave the concoction its wheel stopping power.


Normally my modus operandi when it comes to mud and sand is to ride as much as possible, not that pushing the pedals is necessarily always faster than running, but I do think that it leaves me less wasted when I finally exit the beach/bog.  My trusty new Challenge Limus tires helped me to crank through nearly every mud section, but I was definitely slower than the runners and I think pushing through the mud added to the amount of tire stopping goo that I managed to pick up.  In hindsight I should have swallowed my pride, ignored all the spectators egging me on to continue riding and shouldered my bike at the start of the mud sections. 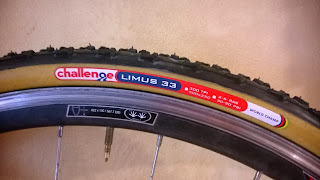 I’m a bit disappointed with seventh place but I’m confident in saying that’s as good as I could have done.  I gave it everything that I had – and came up short.

More thoughts on the race can be found at: www.bikehugger.com
Look for Peter's photos at: http://woodinvillebicycle.smugmug.com/SmugPreview
Posted by mikemc at 4:43 PM No comments:

Sam and I went down to McCall Hall last night to watch the new movie chronicling the life of skier/BASE jumper Shane McConkey.  The movie is aptly named McConkey.  First of all I was shocked to see that the hall was packed to the rafters for what I would consider a fairly obscure movie.  Secondly I wasn't prepared for the rave-like scene, I guess I'm an old fogey.

Whenever the subject of extreme skiing comes up I can't help but think back to the old Burt Reynolds/Jan Michael Vincent movie Hooper wherein Burt is celebrating his world record jump from a helicopter when he looks up to see JMV leaping from a helicopter even higher: you're only as good as your last trick.  Pushing your limits for personal reasons is cool, pushing your limits for money usually ends up with someone pushing your casket.

McConkey was jumping off of insanely low objects and pulling releasing the chute lower and lower, he was on a road, and that road led to a dead end, literally.  The guy had a lust for life was inspiring, but I'll take a pass on the low pulls.
Posted by mikemc at 11:51 AM No comments:

Matt and Chad churning up the sand at the MFG Silver Lake cyclocross race this past weekend. 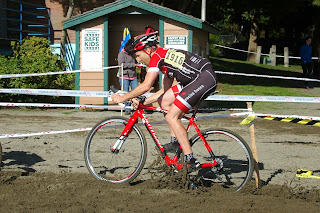 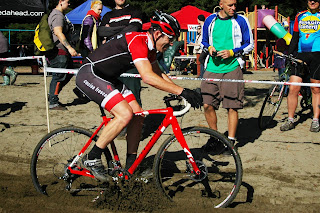 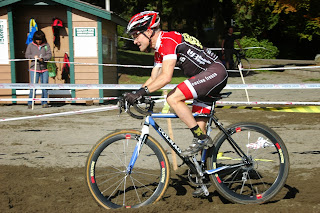 Cyclocross races typically start with a straight all out sprint, the guy who leads going into the first technical section is said to have gotten the "hole shot."  Here Mark and Matt battle for the hole shot. 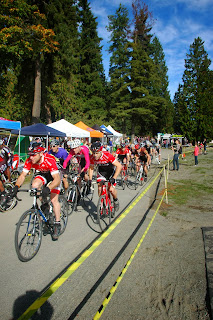 Dennis Crane of DBC photo got some good images, I like this shot as I don't have my typical "I'm in excruciating pain" grimace. 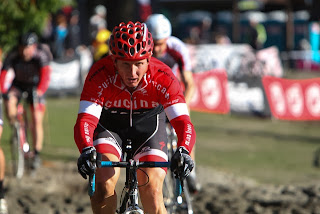