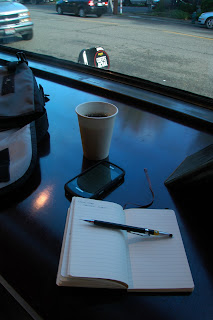 
Still trying to crack the cyclocross nut. Got beat up fairly bad last night at Kore Kross. My main problem is holding a tight line on the grassy corners: I routinely get passed on the tight curves. Yesterday I mounted up a pair of Kenda Kross Supremes; I went to three bike shops and these were the toughest tire I could find. As a side note I’m a bit surprised by how little space Seattle bike shops dedicate to cyclocross. The races here are immense – the turnout dwarfs that of road races. In addition the cyclocross design is far and away the most versatile bicycle style: if I could only own one bike it would be a cross bike. Anyway I got new tires and pumped them up to a risky thirty five psi.
Prior to my first cross race I’d heard that you should run your tires a bit “soft,” so I raced with what a road racer would consider low pressure – eighty psi. I’m lucky I didn’t kill myself. Now I drop it all the way down to the mid-thirties - seriously risking a pinch flat – in order to rail through the corners. I know it’s possible to hold a tight fast line through the grassy curves, but still I’m wobbly, wide and sketchy at best.
The new tires didn’t make much of a difference, so I guess the rider is at fault. Unlike road riding, it’s hard to practice cross racing, especially grassy turns. There are a few trails near my house where I can practice single track riding, but most of the courses that I’ve seen have a lot more grass than dirt.
Posted by mikemc at 2:28 PM No comments:

Rode cyclocross training last night, the evenings are getting darker, wetter and colder around here. Only the geezers and die-hards remain in attendance. I enjoy these Wednesday night sessions because they allow me an opportunity to work on my aggression.

A young guy showed up last night – I’d never seen him before – with a Motobecane single speed and he tore up the course. Normally when you get tangled up with another rider there are a lot of apologies and oh go ahead’s but this guy bashed on past without so much as a flick of the head. He wasn’t goofy and unpredictable, like most of the juniors, he was solid, he was fast and if you were in his way he was going on by. On the final lap I decided to take his queue and upped my aggression three or four notches.

It’s easy to suck wheel in cyclocross. First of all, if you’re a road rider sitting on a wheel becomes kind of ingrained behavior. Secondly it’s easy. The guy in front will always take the best line, so if you want to get around you’re going to have to take the longest, roughest, suckiest route. In other words, passing is really tough. You have to really want it. At the North Bend race two weeks ago my wherewithal was put to the test. On the final two laps I ran up against the tail end of the 35+ racers (I race 45+) and if I wanted to get anywhere I had to push past. It was a good lesson; I kept my pace up, pushed on by and didn’t look back.
Posted by mikemc at 10:16 AM No comments:

Ying and Yang in Ballard 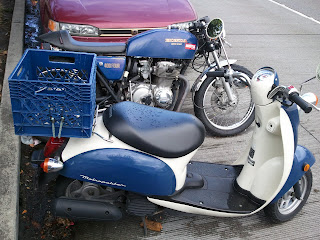 Had some business in Ballard yesterday and was able to spend a rainy hour walking the main drag. Stopped in at the Dutch Bike Company some coffee then wandered north stopping in at Second Ascent - just to see if they had anything cool - they did.
Posted by mikemc at 1:07 PM No comments:

I’ve finally settled on my epitaph – a slogan, a motto, a thought from the other side. Five simple words that sum up a life – my life: at least I fucking tried.

My all time favorite quote comes from good old T.R. – the Rough rider himself:

Far better it is to dare mighty things, to win glorious triumphs even though checkered by failure, than to rank with those poor spirits who neither enjoy nor suffer much because they live in the gray twilight that knows neither victory nor defeat.

Far too many live in the gray twilight, and for good reason: things go easy there. It’s easy to say “I should’ve.” It’s easier to say “I could’ve.” It’s the rare person who can say “I tried.” Rarer still is the one in a million who can look back on life and say “I did.”

The word adventure is overused by advertisers marketing their crap to soft squishy Americans: how does driving a brand new four by four down a gravel road constitute an adventure? That ain’t my idea of adventure. On the other end some purists have hijacked the word claiming that an adventure must include some sort of near-death experience, or, at the very least, a large element of risk. I guess everyone is entitled to their opinion, but in my book an adventure means that the outcome is uncertain.

The death of Steve Jobs should serve as a wake-up call for all of us living in the gray twilight: life is short, make your time count. I’m not ready to deify Mr. Jobs as many would like, but he did make his time count.
Posted by mikemc at 10:21 AM No comments: 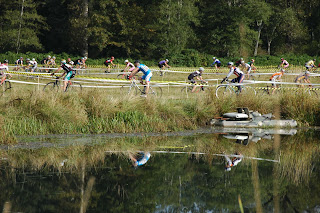 An old friend of mine, who I just learned is now President and CEO of K2 Skis, used to say with regard to skiing, “if you ain’t falling you ain’t improving.” I took those words to heart, and even today when I go skiing I hit hard and I hit often. But the philosophy doesn’t simply apply to skiing – it also applies to cyclocross.

I think you could have a very successful career as a road racer and never once taste concrete – at least I hope this is the case – but if you want to be a competitive cyclocross racer you have to ride the thin line between vertical and horizontal.

I raced at Meadowbrook Farm in North Bend on Sunday; it was a flat, grassy, bumpfest, and now, two days later, I feel more like I spent my weekend in an MMA ring than on a bicycle. Actually the course was perfect for me: flat with spacious straights and wide generous turns. I finished 15th despite going down prior to the first barriers and losing my chain. This was by far my best race.

It was on the first lap and I came in hot on the inside of a left hand turn and before I knew it I was on the ground sliding across the grass. Lucky for me the guys behind me were quick on the pedals and I didn’t get run over. I was maybe thirty feet shy of the barriers, so I shouldered the bike and ran for it. When I remounted I realized that I’d lost my chain. Re-chaining was the killer – I probably lost seven maybe ten places, bummer that I went down so early as we were still fairly bunched up.

As I’ve noted in the past my biggest obstacle when it comes to bicycle racing is myself. I just don’t have the killer instinct, that little extra ounce of something – I don’t know what it is – that pushes you past that guy in front of you. I seem to be, however, moving away from that “oh it’s nice here in the back,” mentality.

The race on Sunday had some wide open easy pass areas and I used every opportunity to push past the guy in front of me. Halfway through the third lap I was running into the 35+ racers and had to get out on the rough to pass while they cruised along on the smooth(er) beaten track. I was tempted on a few occasions to yell “get the hell out of the way,” but hey we’re all in it together, and you gotta work if you want to pass.

At the end of the third lap I was pushing hard towards the finish line when I heard the announcer say “last lap.” What? This is a four lap race! I thought it was three. Dang. Actually I was happy for the surprise lap as I was able to move up a few more places.

It was a great race in a great venue – I can’t wait to get out there again.
Posted by mikemc at 8:38 PM No comments:

Seems like whenever I put on my bike kit I might as well be painting a big target on my back. Take this morning: I was riding up to my team photo and, as usual, was running late, so I was cruising along East Mercer, maybe twenty twenty one when I pass some dude, give him a wave and move on; well three minutes later here he comes around me at probably twenty six twenty seven and then immediately pulls back. The guy had totally gassed himself. In days gone by I would have just slowed down and let him move on up the road, no need to cause a commotion. But those days are no more. The second that fella slowed down I threw down and buried that asshole.

I get passed all the time; it ain’t no big thing, but if you’re going to pass, do it and move down the road. This gassing oneself just to get around the guy in the team kit and then puttering out is nonsense, but it’s common nonsense.
Posted by mikemc at 8:45 PM No comments: