I cruised through the Worn to be Wild exhibition at the Experience Music Project here in Seattle; it’s an exploration into the history of the American leather jacket.  The jackets that had been customized by their owners were what I liked best.  I prefer clothing that reflects the personality and passions of the owner.  Whether they were WWII A-2 bomber jackets, biker cuts or punk rocker wear these jackets were more than simple outerwear, they were a leather canvas on which the owner displayed his/her thoughts, associations and accomplishments.


I especially liked this rocker jacket from the 90’s Seattle punk/grunge scene: 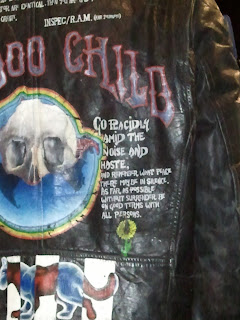 Heart and Soul
When I told my family and friends that I was going to start up an American made clothing line they either smiled and remained silent, or simply came out and told me that my idea was “crazy,” “naïve” or, in one case, “stupid.”  Convention says that in order to make a profit in the clothing industry you need to import large production runs from overseas factories.  “You make your money on the volume,” they say.  I view this as a race to the bottom.  It’s making money by squeezing another thirty cents per garment out nameless workers.  I’m not into that.  Instead I’m into putting my heart into clothing that has soul.


Consider the guy in his small Portland one-man hand built bike factory.  He’s putting his heart into his work, it’s not a paycheck for him; it’s a way of life.  Can you argue that his frame will somehow perform better than what rolls off the line at a Taiwanese factory?  In most cases I’d say no.  But that hand built frame has something that the factory bike does not have, and that something is soul.

While driving to Park City last August I listened to Keith Richards’ autobiography – it was good, I didn’t like him badmouthing everyone save Charlie Watts, but it was good – and somewhere towards the end he compared the Fats Domino version of Ain’t That a Shame to the version recorded by Pat Boone.  Pat Boone, Richards notes, is arguably the better singer, and his production quality is far superior, but his recording falls flat; it’s too commercial, too ready for prime time, it just didn’t have soul.


This is what I’m talking about.
Posted by mikemc at 7:57 AM No comments: