Horrible night’s sleep, awake most of the night, when I was asleep I had nightmares. Yesterday on the ascent to Valsorey we got in the middle of some wet, point-release slides, in hindsight they weren’t that big of a deal but I guess they kind of shook me up. I think that the aura of the Plateau Du Couloir, combined with the left-over anxiety of the slides, had me a bit freaked out, and kept me awake. I should be tired tonight.
The sleeping room was quite warm, perhaps too warm. The hot stink really hit me in the face after returning from my many forays to the outhouse. I was already awake when my alarm went off at 6:00. I laid in bed till 6:10, no other folks moving, but I decided we’d better get going. Packed and down to breakfast at 6:30. We shared the hut with twelve other folks:
4 French
4 Swedes (2 husband/wife pairs)
2 Germans from Freiburg
2 Welsh
The French (Basque) were very stand-offish, the Swede ladies were nervous about the Plateau Du Couloir, while the Welsh and Germans were pretty cool.
We were skinning up to the Plateau Du Couloir by 7:15 – it took about two hours to reach the top. It was some exposed skiing and I sure was glad to have my ski crampons. Skinned about two thirds of the way up; the final third was in crampons. Bill busted trail the entire way. Scott made it about halfway on his split snowboard before he packed it up and started booting. The climb wasn’t super difficult, but a fall wouldn’t have ended on a positive note. Snow was very slabby and a bit nerve-wracking. All of the other parties were at least half and hour behind.
Skied over to the Col du Sonadon, and then descended horrid breakable crust – I mean really bad. A few big traverses and several good descents put us in the valley below the Chanrion Hut. We could see a good portion of the route behind us, but we never saw the other parties. The final six hundred foot climb to the hut was easy and we pulled in at 1:00. The French team came in around 2:30 and the other parties filtered in till 4:00.
We ordered up some pasta with meat sauce for lunch – that hit the spot.
Saw what I think was a Chamoix on the ascent to the hut, and stopped to take a few photos with the big telephoto. The weather was spectacular, couldn’t have asked for better. Right now clouds are coming in from Italy. We’ll see what tomorrow brings. 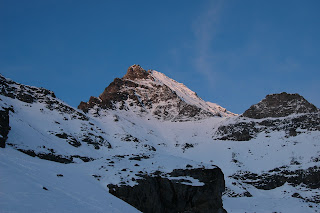 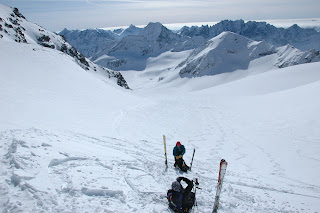 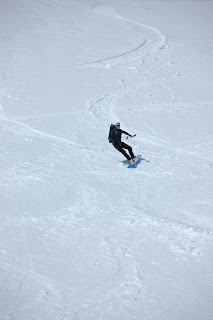 We even manged to ski (and ride) a bit 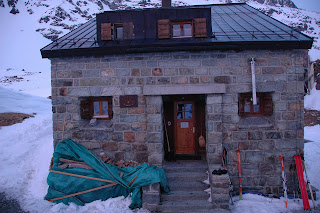 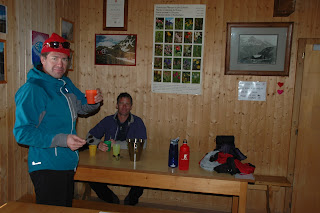