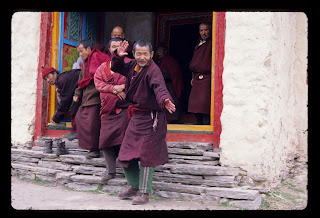 Back in 2002 I went to the Himalaya to climb one of the least, if not the least, known eight thousand meter peaks: Manaslu. The trek to high camp was eight days of unspoiled culture immersion, meaning that there had been very little Westernization and we witnessed a way of life that has progressed with little change for hundreds of years. Our trek ended at the eleven thousand foot town on Sama, very near the Nepal/Tibet border. Sama is home to a large Buddhist temple and our team was invited to join in for what I can only describe as a good luck ceremony.

Some members of our team turned up their noses at the invitation, but my buddy Brian and I hustled up the hill so as not to be late. The ceremony was a mixture of chanting and incense burning and it gave me an opportunity to think about things. Now Buddhists don’t worship some singular deity, some omnipresent, omniscient being, so I had to ask myself “who are they praying to.” In Western Christianity you pray for the protection of an overseeing God, and if you don’t die you say “thank God,” and if you do die your family says “well I guess God had other plans.” Simple enough, but what about these Buddhist fellas.

I came to the conclusion that the monks were, in essence, giving us their sincere good wishes. We, like them, are travelers on a road, and if in our case that road contains a really high mountain, well then so be it. I’d bet that most, if not all, of those monks saw nothing but futility in our quest, but they accepted that this was the task we had chosen for ourselves, and so they said good luck, hope you make it out alive. In hindsight I don’t think that I could have asked for anything more.
Posted by mikemc at 9:57 AM