My newfound habit of meeting Melony at the door, putting our four-year old son Sam in her care and then commencing my exercise routine tested the tolerance of an already tolerant wife. I had thrust Melony into another no win situation: the more I trained the better my chances of survival while the more I trained the less we saw of each other and the more responsibilities I pawned off on her.

In addition to the physical training, I both studied what little route info we could scrounge together and reviewed every mountaineering skill that I had developed over the past fourteen years. I inspected every piece of mountaineering gear searching for weakness and I developed field repair techniques, if some piece of equipment wasn’t deemed satisfactory it was tossed into the drawer and a new improved item was bought. My focus on Manaslu was complete; I didn’t ha 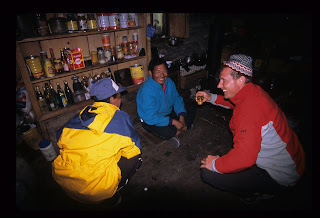 ve room for anything else. The more I ran, rode, climbed, studied and practiced the less accepting I became of weakness, and in the end I feel that became quite cold and dispassionate towards the trials of several of my companions.

We were going to climb a big mountain and we were going to need a big pile of food, fuel and equipment to do it. There are two schools of thought when it comes to high altitude mountaineering: expedition style and alpine style. Expedition style, some call it siege style, is where a large highly equipped team establishes a ladder of stocked camps and fixed ropes up the mountain. After everything is in place the summit team follows the chain of established camps up the mountain carrying very little in between. Acclimatization is accomplished through the up and down effort required to establish the camps and set the permanent ropes. Alpine style in contrast is a bottom to top climb up the mountain during which the summit team carries all the necessary food, fuel and gear in one continuous push. The alpine style climber acclimatizes by making forays up the mountain or by climbing neighboring peaks. The advantage of expedition style mountaineering is the safety of established camps and fixed lines, but it requires a large amount of gear which must be removed at the end of the climb, and expedition mountaineers must make repeated forays across dangerous terrain while stocking camps and setting lines. Alpine style climbers only have to cross dangerous terrain twice – once on the ascent and once on the descent – and have only a fraction of the gear requirements of expedition-style mountaineers, but climbing in such a daring – some say “fair” - fashion way requires a super fit and extremely competent climber.

As someone who didn’t know how his body would respond to the ravages of high altitude I wasn’t willing to expose myself to the dangers of strict adherence to the alpine style. But neither was I willing to lay siege to the mountain. In Nepal there is a large pool of for hire high altitude mountaineers, these fellows are commonly known as sherpas though many are not ethnically Sherpa. Sherpas are paid to carry loads, establish camps and fix rope and many of these professional climbers view as an unnecessary liability. It is quite common for foreign climbers to hire a number of sherpa climbers and then assign them the task of establishing a chain of camps and ropes up the mountain, this method leaves the other climbers free to acclimatize by moving up and down the mountain with little more than daypacks. The rewards of a summit reached only by having another man carry your weight didn’t seem to be worth the effort. We had to find a middle ground.

None of us had ever climbed with sherpas, so we spoke with mountaineers who had. Some swore by their hired companions while others stated that their sherpas were little more than an extra mouth to feed. With our small team of only six climbers it seemed to me that two strong sherpas would be worth their weight in gold. But what if one became sick or injured? We decided to hire three. Little did we know at the time that this would be our most critical and wise decision.
Posted by mikemc at 9:40 PM