As evening fell on the hamlet of Dobhan I watched Ngawang disappear down the trail. He returned a half hour later carrying two greasy antifreeze containers. “What do you have there?” I asked.

Ngawang spoke very good English, “local beer” he said, “like chhang.” Chhang is a locally brewed hooch made from available grains, typically rice, corn and millet. I never did try chhang, but towards the end of the trip I did enjoy more than a few glasses of rakshi – a locally made distilled spirit.

I continued to question Ngawang, asking, “Is all this for you?”

“No it is for the porters. All have worked very hard.” 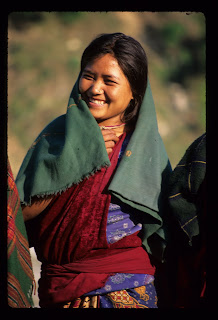 Later that evening several of us climbers took up positions in the shadows in order to listen to the a cappella voices of our eighty seven porters. First the men would sing a refrain and then the women would answer back. The singing and occasional dancing went on deep into the night, but by six o-clock the next morning every porter was on the trail.

The following day as we approached the town of Philim, Brian asked Shiva what a hand painted sign over the trail said. Shiva looked up casually as he passed beneath the banner and said “it says ‘you are now entering Maoist territory.’” We spent our fifth night in Philim, a relative metropolis of houses and barns anchored into a steep hillside. While enjoying the cool of the dusk Brian and I stopped and squatted next to our two farmer sherpas – Kusang and Ki Kami – who were watching a local blacksmith fashion adze heads. As the smith pounded the red steel ring a boy of not more than ten tended the fire with a bellows made from a hollowed out goat.

We set our sixth camp in a walled pasture on the outskirts of Bihi, a crumbling village high above the Buri Ghandaki. Bihi marked a dividing line of sorts we were leaving the fertile lowlands of the Garung people and were entering the sparse Nubri Valley: the high altitude land of the Tibetans. The Garung people practice a mixture of Hinduism and Buddhism, but during the first five days of our trek I’d not seen a single religious symbol or building. Though the days remained mercilessly hot the cool eveni 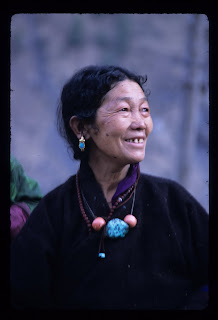 ngs signaled our arrival in the Nepal Himalaya – the realm of the Tibetans. An accountant would describe Nepal as a Hindu country, as this is the religion of the majority, and a government official would consider the people of the Nubri Valley Nepalese though ethnically they are Tibetan. Unlike the Tibetans of China, four miles to the north, the inhabitants of the Nubri Valley have been left to live their lives in relative peace, thereby preserving a fairly pure form of Tibetan culture. Bihi was where we began to see the omnipresent symbols of Tibetan Buddhism.

A half mile above Bihi, a six foot high water powered prayer wheel creaked on a dry axle as it released its prayers into the clear mountain sky. The trail split around stone walls manufactured of intricately carved mani stones and passed through kanis – arch-like buildings containing brightly colored and carefully detailed Thanka paintings. As we passed through the first kani of our trip Brian pointed to the ornate box-shaped ceiling and said, “well right there’s the secret of life, too bad we can’t read it.”

The Tibetans were darker, more weathered and more thickly clothed than were our Garung porters. I suspect much of the Tibetan copper complexion was due more to a buildup of soot and dirt than it was due to genetics. The Garungs, especially the women, paid meticulous attention to their appearance, while the Tibetans appeared to place no importance whatsoever on cleanliness. The hands of men, women and children looked like those of a returning to the surface coal miner. In one village, I met a two-year-old girl standing alone in a yak trail chewing on a piece of charcoal. With the exception of two green-yellow lines extending from her nostrils her face was the color of graphite, and my sustained effort to coax the burned stick out of her clutched hands proved unsuccessful. A friend had told me that you could tell which Tibetan children suck their thumbs by looking for a clean digit.

We spent the final evening of our trek in Lihi where I sat on a dry mortar stone wall watching a grandmother produce coarse gray cloth from a soot-stained loom. Simply to exist in this never summer region required a level of toil and a tolerance for suffering that is unimaginable to those who share my easy life history. How can a person who considers hot and cold running water a simple taken for granted reality relate to someone who at the age of five began a daily lifelong routine of carrying on their backs every drop of water consumed in the house. There is simply no common denominator, yet still I was greeted with a hearty “namaste bai.”

While passing through the village of Lo I first saw Manaslu. The grand cathedrals and palaces of the world are generally much smaller than what you had imagined, however the great mountains and chasms of the planet are typically twice what you could have dreamed. Manaslu was no exception. From our initial aspect the true, more rounded, summit was obscured by the black, spear-shaped East Pinnacle, and had I not studied this mountain and known that our objective was more modest I might have turned around. We did not have the luxury of distant views where the mountain appears as slightly larger bump on a white horizon, instead we turned a corner and there was our white pyramid, less than seven horizontal miles and more than three vertical miles away.

After the village of Lo, Manaslu became a constant looming presence, but instead of worrying about how we were going to reach such a distant and useless pinnacle I refused any thought that didn’t concern the next twenty-four hours. We’d thrown our fate into the wind, for it is was the wind - how hard it blew, where it pushed the clouds and on what aspect it drifted the snow - that would dictate success or failure on the mountain. I chose to live in the present because the future is in the future.
Posted by mikemc at 9:49 AM

Don't fall off the mountain! You can bounce Ok for about the 1st two thumps, but after that...Oh well.
Never forget to Duck and Cover!
Tom Marrs
Former Rider