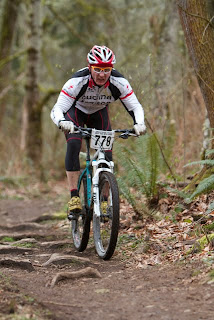 I rode my first mountain bike race on Sunday. I was a bit nervous as my technical skills are fairly low end and I didn’t want to be the gaper on the trail clogging up the system. I’ve never raced trail before, so entering as a “beginner” seemed legit. The race started at nine; at eight thirty I decided to go for a warmer upper.
I rode out onto the race course with no idea of how long it would take me to get back to the start line. At about eight fifty I was getting pretty nervous. Luckily a couple of minutes later I spotted a herd of colorful riders. I pulled up as the race director called beginner forty plus to the start line.

My teammate Jason lined up in front, I eased in behind him. They were running the forties and fifties together and the field behind me was substantial. I didn’t survey the crowd too closely for fear that I’d have a natural tendency to self seed myself a little further back. I figured I’d line up near the front, push hard and if folks need to get around me well they’ll just have to work at it.

The opening sprint was run on a soupy road, but after about a hundred yards we turned left and descended some groomed single track. Jason and four or five other guys were gone down the hill while I tried to stay aboard my trusty Yeti. I could feel the pack pushing hard at my back. I started asking “what the hell did I get myself into?”

With every descent comes an ascent and the climb back out of the ravine revealed that while I wasn’t the most technically savvy, I was quite a bit stronger than most of the field. The climb, coupled with some rolling terrain allowed me to separate from the pack and to push my way forward. Some guys were cool about letting me get by, others made me work for it.

I started the second lap behind a Cycle U rider, he was more skilled but I think I could compete with him from a strength standpoint, so just tried to keep him in my sights on the downhill and pushed it as hard as I could on only flat portion. He went down at a log jump and I seized the opportunity to get around him. A few minutes later I found myself behind another rider who was going maybe ninety five percent of my pace. I was pushing hard to get around him, but he didn’t give an inch. I wanted to put some distance between myself and the Cycle U guy and this hold-up was starting to get aggravating.

It’s easy to pass someone who is riding considerably slower than yourself, but it’s a bitch to get around someone who is just a little slower: you need a lot more space. Finally I pushed around the guy and rode hard to bury him. Once he was out of sight I was on my own; I didn’t see another rider for the remainder of the race. I crossed the finish line with no idea of how I had placed. It turns out I placed second behind my teammate Jason. My first top ten finish. It looks like I’ll have to try another mountain bike race.
Posted by mikemc at 9:23 PM