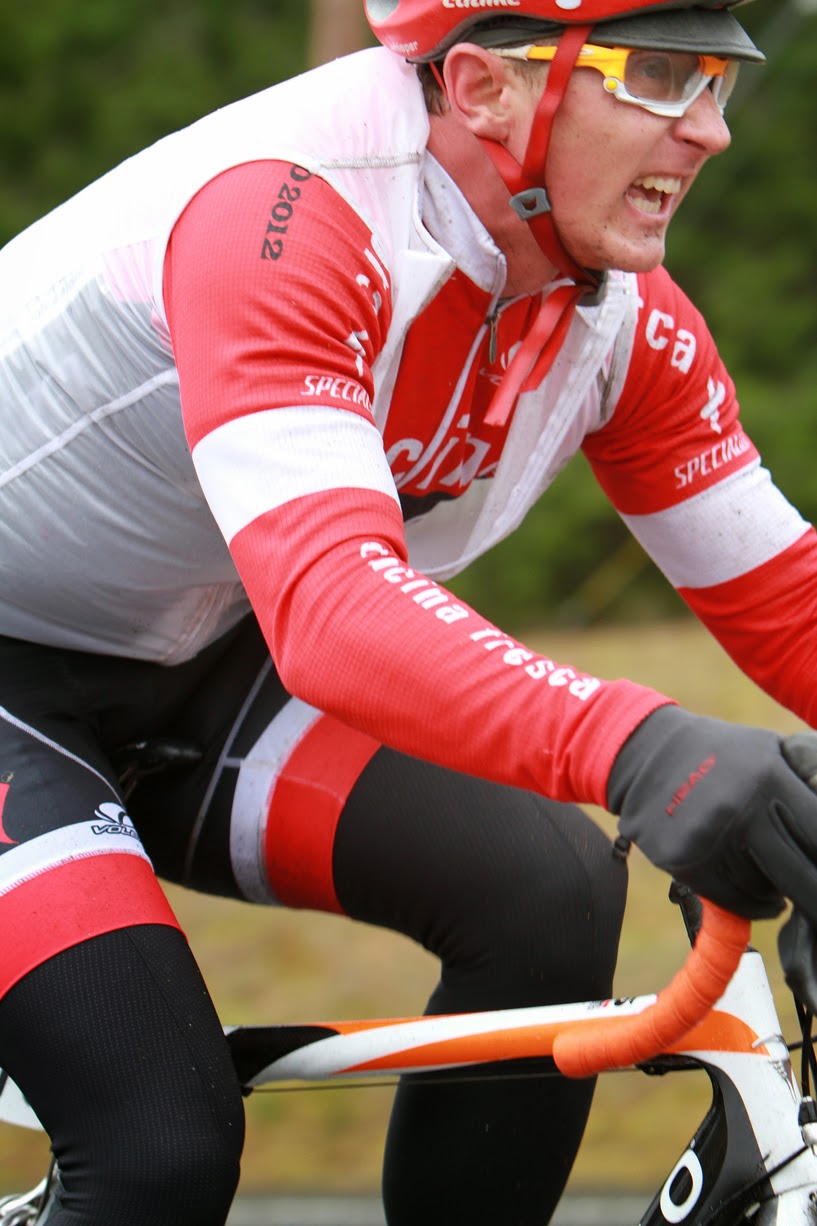 Never before had I worked so hard for so little.  My strategy for the three lap Vance Creek Road Race  was to start easy – roll with the group – for the first trip through the farm road in order to preserve my legs for the climb.  When we hit the highway I was near the back – a stupid place to be – so I started moving up, and, dare I say, I was doing okay as we rolled past the feeding station.  As the grade steepened I started losing a few places here and there, but it was on the final climb to the finish line where I lost contact.  Looking back I’m kicking myself – dang dude if you would have just dug that tiny bit deeper you would have made it.  Maybe I’m just getting to be an old fart with an old heart but during every race I go through a twenty to thirty second period wherein I just can’t catch my breath and my heart feels like it’s going to explode – once that passes all is cool and it doesn’t happen again.  Usually when this happens I can roll with the pack and recover, but on Saturday it happened at the base of that final roller and damn I just didn’t have it.


Anyway I came over the top and there was a long line of stragglers in front of me.  Now I really threw down – snot flying – I had the throttle wide open when I made the right hand turn onto the downhill.  I figured just go all out and maybe I'd be able can catch the group turning onto the farm road.  No luck, but by the time I hit the farm road I was in a chase group of about seven or eight guys.  We were maybe one hundred yards off the back.  A big HSP guy and a little Starbucks guy really knew what they were doing, but these two other guys from a nameless team kept screwing the paceline.  They’d get to the front let up and ride two abreast – were they blocking?  The HSP and Starbucks guys were getting pissed but I tried to stay positive – “come on guys work together we can catch them.”  We picked up Paul who was solo and he joined on.
Every time we got close to the lead group the mojo would fall apart – the stronger guys would get frustrated and try to bridge across, then they’d get gassed and fall back, we’d surge forward and then fade back.  When we hit the highway I really thought that we’d catch on, but then I started thinking, “dang when I hit that hill I’m going to be totally gassed.”


We turned right onto the climb and the follow car was gone – what the hell happened?  I turned to the HSP guy and said “goddamit.”  I was actually feeling strong at this point and dropped the other chase group guys and even passed a few stragglers from the lead group.  I was riding on the smoother shoulder as I passed one guy.  He said “there’s a lot of glass out there you might get flat.”  My response was “only if I’m lucky.”


I climbed feeling like a million bucks and at the top I was joined by the big HSP guy.  He said “I’ll work with you if you want.”  I said “yeah man we might catch them on the downhill.”  We went full bore down that hill – no coasting spinning as fast as our legs would go the entire time – but no cigar.  On the farm road we picked up a Donkalope rider and were picked up by an Audi guy and another guy.  We got a somewhat functional paceline going and pushed all the way to the final Km where we went every man for himself for the line.


Let me say it again – never before have I worked so hard for so little.
Posted by mikemc at 7:18 PM